FeastDay! board game coming out soon 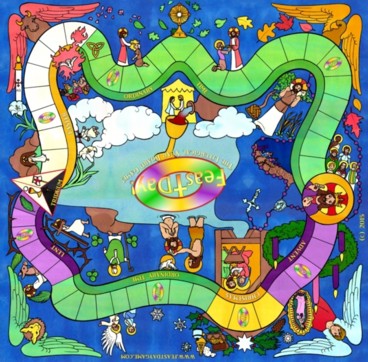 FeastDay!, a board game about the liturgical year for which I did the design and illustration, is coming out this Advent and is available for pre-order!

It reminds me of a combination of Chutes and Ladders and a Catholic Trivial Pursuit, and there are options for treats!

Catholicmom.com has an article about it and Steve Botsford, its creator:


I met the creator of FeastDay! The Liturgical Year Board Game! at a Charleston, South Carolina Diocesan Conference. Steve Botsford, a convert to the Catholic faith, holds a Master of Religious Education degree from Loyola University and is a master catechist in the Archdiocese of Atlanta. He and his wife are marriage preparation sponsors. He has also served ten years as parish youth minister and remains an active catechist. Added to these game-creator credentials, Steve is a father of three who knows the value of a good family game firsthand.

Read the rest here.
Posted by Mary MacArthur at 5:04 PM No comments:

Coloring page of St. Josaphat, a "sinner against ecumenism"

"There is a big sin against ecumenism: proselytism," said the pontiff. "You must never proselytize the Orthodox. They are our brothers and sisters, disciples of Jesus Christ."

From the National Catholic Reporter. (Some may argue that since the Reporter is heretical, they must surely have twisted Bergoglio's words, and he has never said anything but pure Catholic truth. To that I can only say, after I stop grimly laughing, he's said the same sort of thing tons of times, reported by many sources of varying agenda and levels of orthodoxy.)


So trying to convert those in the Eastern schism is a sin. Hmm. He should try telling that to St. Josaphat Kuncevyc, bishop and martyr.

From his zealous study of the liturgical books he drew many proofs of Catholic truth, using his knowledge in the composition of several works — "On the Baptism of St. Volodymyr"; "On the Falsification of the Slavic Books by the Enemies of the Metropolitan"; "On Monks and their Vows". As deacon, priest, and bishop, he was distinguished by his extraordinary zeal in the service of souls. Not alone in the church did he preach and hear confessions, but likewise in the fields, hospitals, prisons, and even on his journeys. Even where his words of instruction might by themselves have failed, his entreaties and tears ensured him success. This zeal, united with his kindness and extraordinary love for the poor, won numbers to the Catholic Faith. Among his converts were included many important personages such as Ignatius, Patriarch of Moscow, and Emmanuel Cantacuzenus, who belonged to the family of the Greek Emperor Palæologus.

As archbishop he restored the churches; issued a catechism to the clergy with instructions that it should be learned by heart; composed rules for the priestly life, entrusting to the deacons the task of superintending their observance; assembled synods in various towns in the dioceses, and firmly opposed the Imperial Chancellor Sapieha, when he wished to make many concessions in favour of the schismatics. Throughout all his strivings and all his occupations, he continued his exemplary life as a religious, and never abated his zeal for self-mortification and prayer.

While each succeeding year saw fresh evidence of his fruitful labours, it also witnessed the steady growth of the hatred of the schismatic party. Finally on 12 November, 1623, an axe-stroke and a bullet brought Josaphat his martyr's crown. After numerous miracles had occurred, a commission was appointed by Urban VIII in 1628 to inquire into the cause of Josaphat, and examined on oath 116 witnesses. Although five years had elapsed since Josaphat's death, his body was still incorrupt. In 1637 a second commission investigated the life of the martyr, and in 1643 — twenty years after his death — Josaphat was beatified. His canonization took place in 1867.

From the Catholic Encyclopedia, published in 1910, accessed at New Advent.
Posted by Mary MacArthur at 2:46 PM No comments:

My latest column for the Aitkin Independent Age contains my response to Planned Parenthood's letter, but it's mainly about something much more delightful.


Though I wrote of abortion facilities in general, only mentioning Planned Parenthood as where Tonya Reaves died, a representative thereof felt the need to respond to my Aug. 31 column in a Sept. 21 letter to the editor.

I’m pleased. As they say of video gaming, if no one’s shooting at you, you’re not going in the right direction. The only actual rebuttal they made to anything I said was the assertion that they comply with various safety regulations. They note their regulation through the Board of Medical Practice. The Board of Medical Practice only licenses practitioners, not facilities. Individual practitioners may be required to have licenses, but abortion facilities are not licensed as Outpatient Surgical Centers, like every other non-hospital facility where surgery is performed has to be; neither are they subject to inspections, not mentioned by the letter.

And of course there was absolutely no mention of my main point, which I will repeat and emphasize: even in the cleanest and most professional facilities, someone dies in every single abortion procedure. That’s the point of the procedure.

That’s all I have to say about that, so I’ll turn to a much lighter topic: collective nouns applied to football. Collective nouns are one of the most amusing parts of English grammar: the words for groups of various things, especially animals, are often unexpected and strange. Examples: a murder of crows, an unkindness of ravens, a smack of jellyfish, a wisdom of wombats. I’m sure we all find the one for mosquitoes accurate: a scourge.

Read the rest here.
Posted by Mary MacArthur at 2:22 PM No comments:

A poem by a friend and request for info

The following poem was composed by a young man I once knew and would like to contact again but currently have no way to do so, so if it is at all familiar to you, please let me know by emailing me at snowflakeclockwork [at] gmail [dot] com. I wrote it down from memory of his recital, so there might be inaccuracies.


In a croaking, tangled city, of filth and burning steel,
Of foul membranes and fashions that would make a'body reel,
A tangled field of grit and dust and stark bright flowers stood.
An old man looked on it, and saw that it was good.

"The foul things are coming; they would set up a compound
Of their empty modern progress upon this blessed ground,
And it lies here defenseless, without even a wall;
Will none protect its beauty? Will no one hear the call?"

The people looked at the old man as if he were quite mad,
Till one young man came forward, scarce more than a lad.
Under his long, flame-coloured hair a sullen hope he wore.
His father was a businessman, his mother was a whore.

"I have loved this lot all my life; it is free of creeping shames.
What could the slaves of Mammon give compared to children's games?
Here we were knights and fought the wurms that drop from outer space,
And I pledge my honour and my life to save this sacred place."

The foul things came; he turned his sword against their despot guns
More secret than the Freemasons, more ruthless than the Huns.
They shot him down, prostrate he lay, blood flowing from his breast,
In his hand his sword and a blooming weed he had chosen for a crest.

They sloshed their petrol over him; he blinked and lightly stirred,
With life-filled eyes looked up at them, but did not speak a word.
Under that rain of death he laughed, with pure innocent mirth,
Such as those folk had never heard, had lost soon after birth.

Feared of his joy, they hast'ly lit the gas mixed with his blood;
The flames burst up, their sunset light reflected by the mud.
With shimmering liquid and clasping flame that flashed like treasure fey,
The gave him a heathen funeral, tho' he wasn't a heathen like they.

Free to set up their compound, they made a hollow library,
Full of books that said nothing of God, of fighting, or of Faerie.
And the ultimate dishonor, a plaque hung by their Head,
In memory of him, for they could thrive, now that he was dead.

They gathered for the grand opening, called it a charity ball,
To present the poor with vapid texts to keep them in thrall,
When before them all, bright flames sprung up and flowed over the building,
Drenching it in blood-red light, a scorching scarlet gilding.

Now the field stands free and pure, green from the ashes that in it lie,
And children play, fight, and laugh under the incorruptible sky.
The fires of earth are merciful; they burn and then are gone,
But if we refuse them, there are other fires that burn forever on.

May Our Lady of the Rosary watch over him and all the friends from that time.
Posted by Mary MacArthur at 2:35 PM No comments: