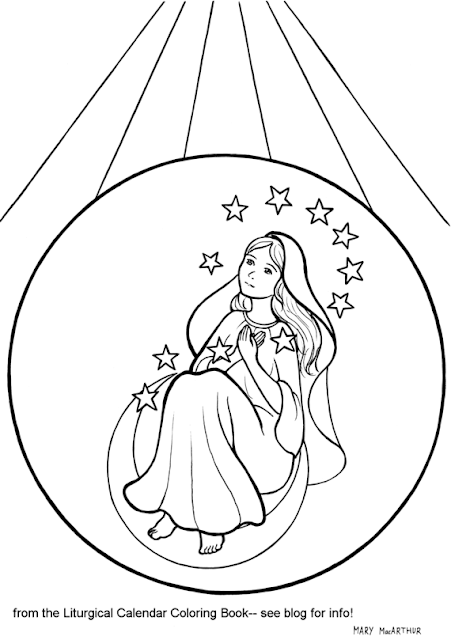 This one is simple, but I really like it.

There's been a page in between I haven't posted; you'll have to subscribe to get every single feastday! Does anyone know their Calendar enough to tell who it is? (without looking it up?)
Posted by Mary MacArthur at 3:26 PM 3 comments: 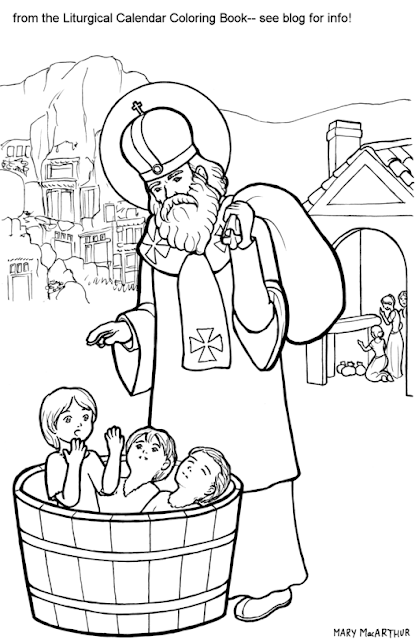 Okay, it came to my attention that the Paypal button wasn't working right, so I've fixed it now. If you wanted/want to sign up to receive the entire Catholic Liturgical Calendar Coloring Book, go here.

St. Nicholas, a.k.a. Santa Klaus, a very cool saint. It was hard to decide what to show him doing. Finally I decided against him punching Arius because we'd just had St. John Damascene yelling at heretics, and went with him resurrecting three boys who had been butchered by a cannibalistic innkeeper.

The Language of Flowers continues

Posted by Mary MacArthur at 11:53 AM No comments: 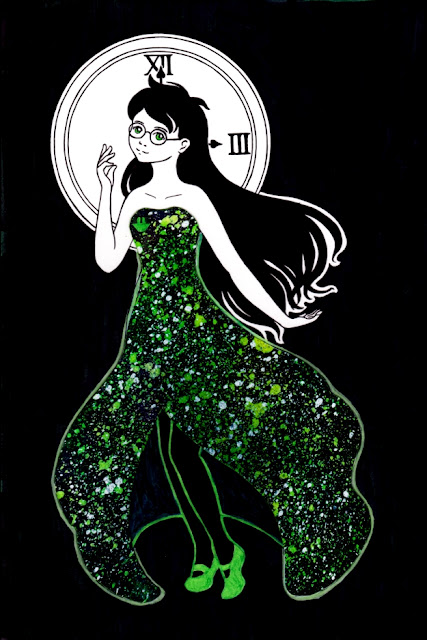 A bit of Homestuck fanart, where I used a fun trick. For the dress, I wanted to spatter ink with reckless abandon. But then it would be hard to keep the clean white I wanted on her skin and the clock. (Look, I included a clock! ^u^) So, I drew the outlines on half a sheet of bristol. Then I traced the outline of the dress, flipped it, and traced the traced image onto the back of the other half of the sheet. Then, on the front of that half, I did this: 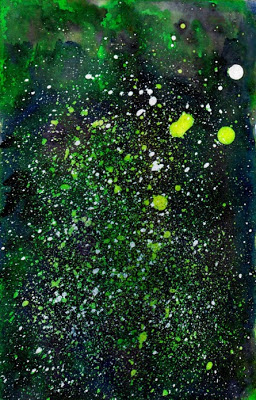 Then I cut along the outline on the back. Because I had flipped it, the shape was facing the right way on the front side. After inking the drawing, I stuck on the dress. Like a paper doll!
Posted by Mary MacArthur at 12:15 AM No comments: 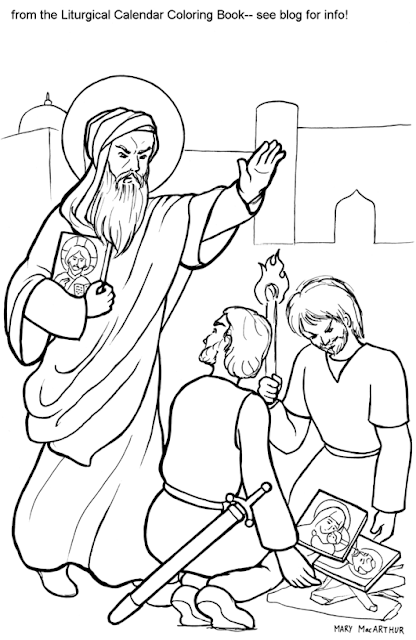 Second page for the Entire Liturgical Year Coloring Book, St. John Damascene's feast is on December 4th. This is a fun one: he's yelling at Iconoclasts.

I won't be posting every page, so that the folks who buy subscriptions will get something for their money that they couldn't get otherwise, but as it's starting up I'm excited and want to show them off. :-)

You can sign up to get coloring pages for every feast of a month, every month, for a year here or in the post below. It's only twenty-nine dollars. I'll probably be starting sending them out this coming January, but possibly December if I get pages done fast enough.
Posted by Mary MacArthur at 11:51 AM No comments: 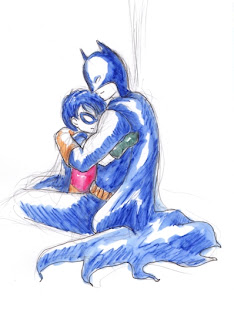 Cute little Batman sketch with a very young Robin.
Posted by Mary MacArthur at 11:02 AM No comments:


Starting one of those projects I mentioned--illustrating the Language of Flowers, with a picture for every single flower! However, I won't post them all online, at least initially. We'll see.

Anyway, to keep the drawings fast and a simple aesthetic, I'll just use the colors that each flower is itself, with the option for adding one more, probably a blue or yellow, (here it's a yellow) as necessary.
Posted by Mary MacArthur at 5:18 PM No comments: 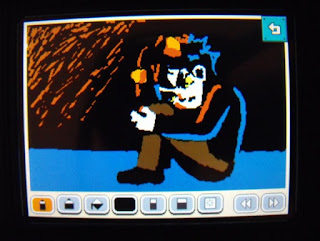 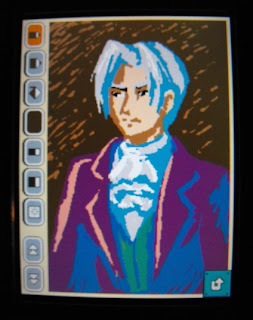 Karkat from Homestuck and Edgeworth from Ace Attorney. I am very much a fangirl.
Posted by Mary MacArthur at 11:40 AM No comments: 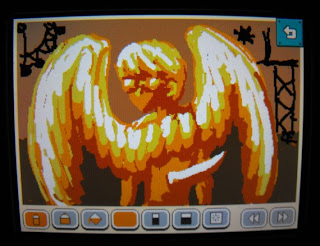 The memo function in Professor Layton and the Miracle Mask is great! More colors than ever, different width pencils and erasers, a paintbucket tool and even Undo! My first doodle on there is of Davesprite from Homestuck; I want to make many more doodles.

Making this post fit the title in another sense, I'm planning two big projects (besides all the projects I've already mentioned) that I'll post a lot here. Both are planned self-published books of a kind, and I'll use this blog and my other online galleries to see if folks are interested. One will be a coloring book, the other new illustrations for an old (and public domain) classic. Watch this space!
Posted by Mary MacArthur at 11:53 AM No comments: 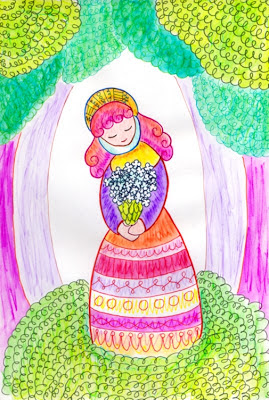 Playing with colored pens.
Posted by Mary MacArthur at 10:49 PM No comments: 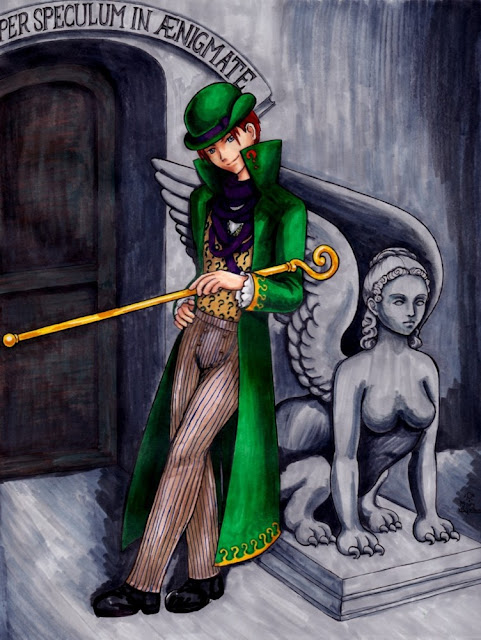 Now that I've done redesigns of most of the major characters I'm going to have in my Batman fancomic, I'm drawing some nice detailed portraits as I get to work on the scripts.
Posted by Mary MacArthur at 11:37 AM No comments: 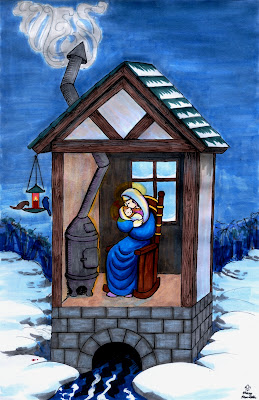 This image is now available on Christmas cards in my shop. Inside, the cards say:


Illumined by grace,
Before the manger of the King,
Who alone reads the sealed book,
A new song we raise.
Let us praise
The Virgin's birthing,
The new Leader we adore,
Who comes to seek us.

That one I translated myself.

Posted by Mary MacArthur at 2:07 PM No comments:

Truth and Justice and Cool Settings

I don't have any of my own art to show at the moment, though I'm working on several pieces, so instead I'm going to do this blog's first ever movie review! The movie is Gyakuten Saiban, known in English as Ace Attorney, based on the first of the video game series. I've been a fan of the games' dramatic stories, suspenseful twists, engaging dialogue, great music, and profound and loveable characters for a few years now, so the announcement of the movie was extremely exciting. It actually hasn't been released in North America yet, (it was released in Japan back in February,) so I watched it online with unofficial subtitles. But rest assured, I will definitely purchase it when it becomes available here!

Since this is a visual art blog, I'm not going to focus on the clever adaptation and consolidation of the story, the complex and powerful acting, the beautiful music, and the new angles reflecting on characters that the movie gives. I'm going to talk about the production design and sets, which were also amazing, and downright gorgeous. The games have many memorable locations, and the look of them is usually like a scene one might find everyday. The movie, however, has a more fantastical look.

The sets have a sort of steam-cyber aesthetic; the architecture ranges from Neo-Classical to Industrial, looks like it might have come out of the 1930's of the future. From the shabby minor courtroom with laundry hanging over the defendant, to the Victorian-hotel style law offices where the hero is a junior partner, to the lakeside shop cluttered with both antique curiosities and cheap merchandise for kids, to the dilapidated swampy cabin where white feathers floating in the air--a motif often used by Japanese filmmakers to show heavenly beauty--add intensely to the atmosphere of creepy desolation, to the ethereal but bleak apartment of a tragic bailliff and his doomed wife, to the classically elegant law offices of the hero's ruthless rival and, ultimately, true friend, to the Neo-Classical imposing grandeur of the great courtroom where the crucial showdowns take place, the locations make a powerful impact on the drama of the story. 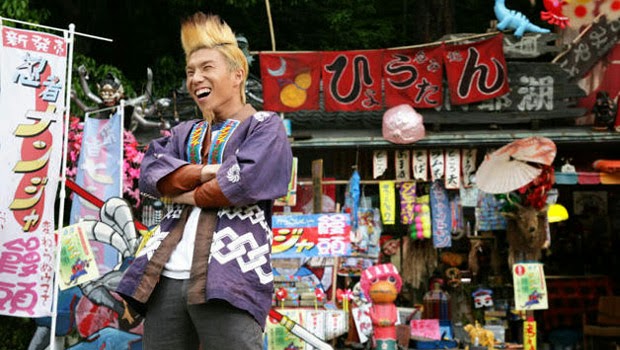 I'm fascinated by visually interesting environments, and hope to incorporate many into my works. For the worthwhile fascination such detail gives, Gyakuten Saiban is an inspiring example. Now if they would just officially release it here!
Posted by Mary MacArthur at 11:59 AM No comments:

Labels: architecture, art not by me, film review 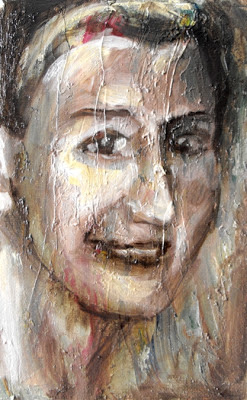 Using up paint.
Posted by Mary MacArthur at 2:29 PM No comments: 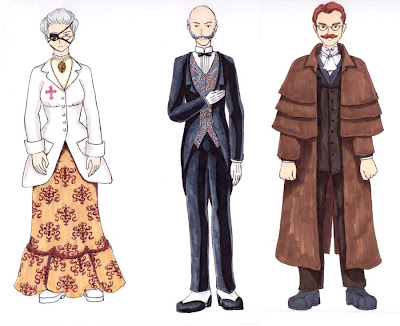 More designs for my Batman fancomic: Leslie Thompkins, Alfred Pennyworth, and Commissioner Gordon.
Posted by Mary MacArthur at 11:52 AM No comments: 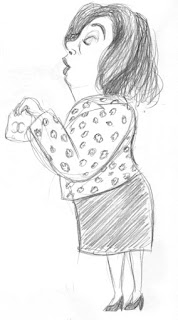 Posted by Mary MacArthur at 4:36 PM No comments: 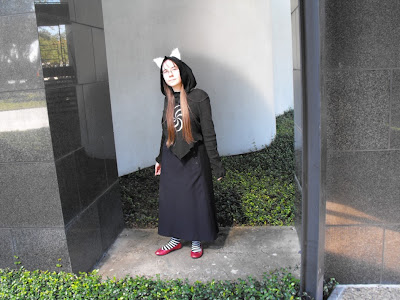 Any readers of Homestuck might have guessed, I dressed up as Jade Harley in her god tier outfit for Halloween. My sister dressed up as Rose Lalonde, and we went to take photos at the university and a nearby pub with an oversized chess set! 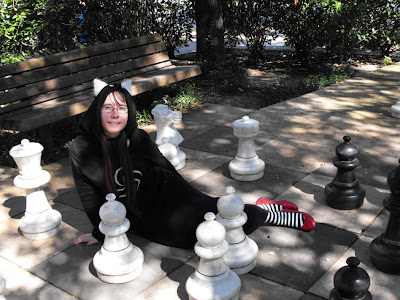 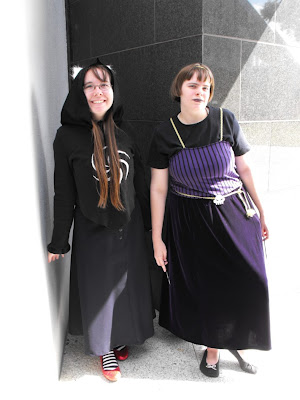 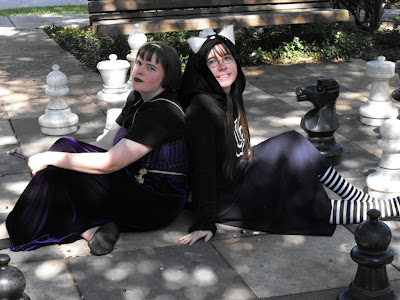 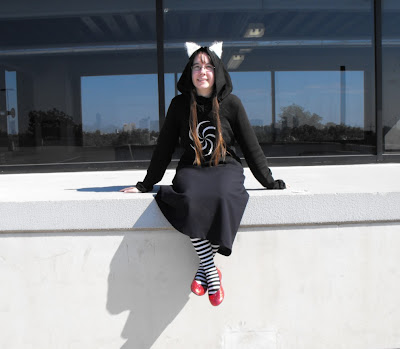 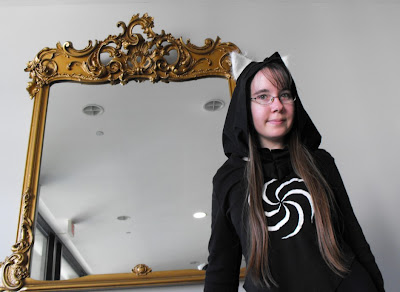 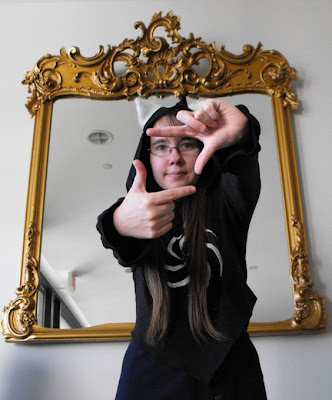 Posted by Mary MacArthur at 4:59 PM No comments: