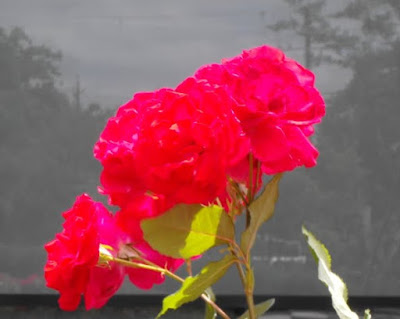 Art Colours
On must we go: we search dead leaves,
We chase the sunset's saddest flames,
The nameless hues that o'er and o'er
In lawless weddings lost their names.

God of the daybreak! Better be
Black savages; and grin to gird
Our limbs in gaudy rags of red,
The laughing-stock of brute and bird.

And feel again the fierce old feast,
Blue for seven heavens that had sufficed,
A gold like shining hoards, a red
Like roses from the blood of Christ.

-G.K. Chesterton
Posted by Mary MacArthur at 2:20 PM No comments: 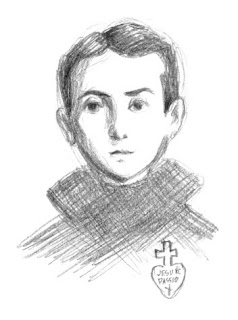 Just a quick sketch from a photograph; I want to get familiar with his likeness because of many pictures I want to make of him, including a very big project I hope to do someday.


St. Gabriel of Our Lady of Sorrows is awesome. (A bit of a rant follows)


I don't understand why people, even faithful Catholics, are so eager to try to disprove the gun and lizard legend. Do we go around trying to disprove the legend of St. George and the dragon? Why can't we accept it for what it is- a legend? I suspect the reason is pacifism. But the Catholic Church has never taught pacifism.


St. Gabriel encountered a soldier about to rape a girl. Should he have just tried to talk the soldier out of it? No one could possibly think that would work, and thus to do so would have been refusing to save the girl when he could have saved her, and would be wrong. What he did do, to grab the soldier's gun and march him and his fellows out of town at the end of its barrel, saved the girl and was right.


I believe in the legend most of all because it is purity, blazing purity, confronting debauchery and, pardon my slang, pwning it. The soldiers mocked Gabriel because he was a monk- a virgin. But he took their guns and blasted a crawling reptile in one shot, and they were cowed. His true manhood conquered their bestialness. Purity is not a constrained, repressed, lifeless thing. It blazes like the sun, and it pwns.
Posted by Mary MacArthur at 4:42 PM 1 comment: 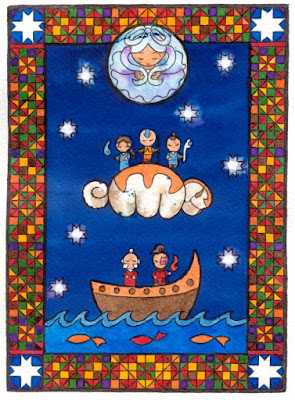 I finished this! It turned out quite warm in tone, and like stained glass. There are faults but they all taught me a lot and I will put the knowledge to use for more pictures like this in future.
Posted by Mary MacArthur at 10:42 PM No comments: 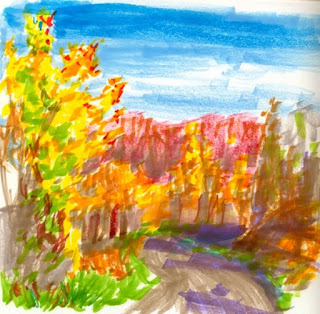 In early Fall in Minnesota a few years ago I went and sat down by a road with a bunch of markers and sketched what was before me as fast as I could.

I wish I were in Minnesota now...
Posted by Mary MacArthur at 8:24 PM 2 comments: 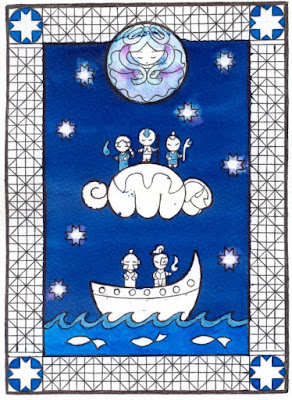 I started coloring this picture, doing the blue ink first, and I found the just blue and white stage very pretty so I scanned it like that before proceeding.
Posted by Mary MacArthur at 11:09 PM 2 comments: 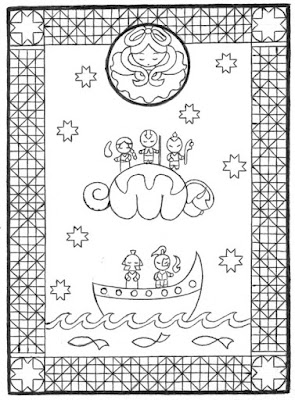 Inspired by Merovingian art, I'm trying a folkart-ish style. The first thing I thought of to do in it, of course, was Avatar the Last Airbender fanart. This is the lineart; I intend to color it with inks.

The second piece will, I think, be something with St. Brendan and Jonah.
Posted by Mary MacArthur at 6:25 PM No comments: 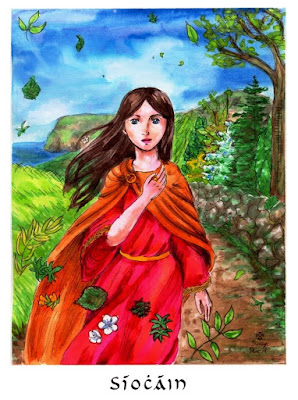 You might have seen this picture already, but ah. ^_^ This is inspired by a legend that says during the reign of Brian Boru, Ireland was so peaceful that a girl with a golden ring walked all the way across it alone safely. "Siochain" (there should be accents over the first I and the A but I don't know how on Blogger; bear with me, I'm just learning) means "Peace" in Irish. There's also an old Irish alphabet called Ogham where each letter is named for a kind of tree. The trees by the road and their leaves/blossoms blowing by in the lower left spell Siochain.

Last summer I went to Ireland, and took many photos which served as references for this picture. But I spent most of my time there in Northern Ireland learning about the Conflict of the seventies through the nineties, talked to ex-prisoners from both sides, including Martin McGuinness who is now deputy leader of Northern Ireland; as well as religious leaders who worked for peace. What I heard and saw also informs this picture's meaning.

As for the Hope part of this entry, I just submitted some art to Gilbert magazine http://gilbertmagazine.com/ (can't figure out how to make words into links yet either) for consideration for their art issue. Prayers please that they like it! *fingers crossed*


Posted by Mary MacArthur at 3:19 PM No comments: 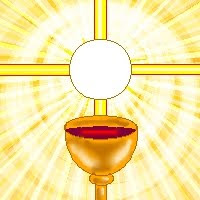 An oekaki I did for Corpus Christi some years ago.


Inspired by a lecture on Thomistic Trinitarian theology, I have finally gathered the nerve to make myself an art blog. Here I hope to put my illustrations, sketches, works in progress and thoughts, and to have a sort of home base on the internet. Up till now that has been my deviantart gallery, where most of my art can be seen: http://firefiriel.deviantart.com/ I hope to get a nice portfolio website soon.

I dream of becoming a professional illustrator, religious artist, and graphic novel writer, and they say an art blog is essential for those with such aspirations. So, here goes! St. Thomas intercede for this venture!
Posted by Mary MacArthur at 2:26 PM 1 comment: