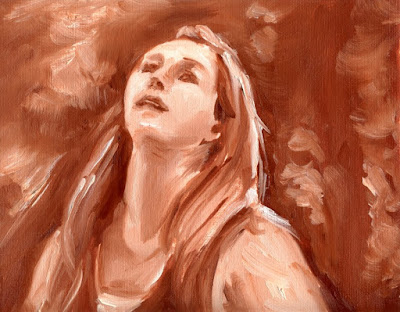 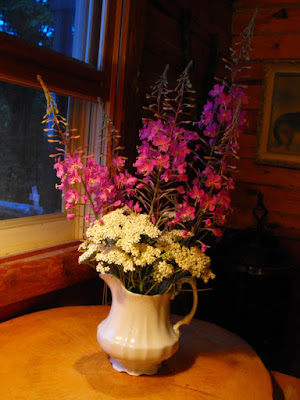 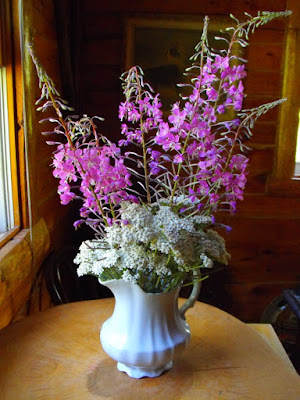 Photos I took of the same flower arrangement under different lights; sometime I want to try drawing them both together in pastels or oil.
Posted by Mary MacArthur at 1:52 PM No comments:

Character sketches for another, shorter comic I'm working on. This one's called Thy Brother's Wife.
Posted by Mary MacArthur at 3:38 PM No comments: 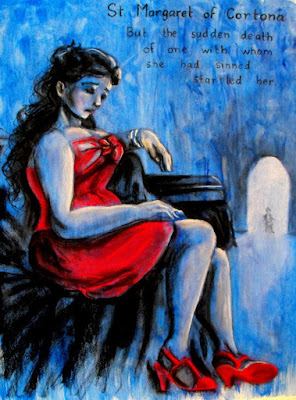 This one I actually modernized a bit, including the model's corset, skirt, and high heels, to express the life Margaret of Cartona lived before her conversion. I tried to keep it somewhat timeless, though, with the drapery and archway. I like this one the best of my life-drawing class saints.
Posted by Mary MacArthur at 3:49 PM 1 comment:

I was teaching my sister to make ribbon roses, and a black one I made turned out pretty well. So I made a choker around it, with silver and black beads, snowflake gears, and a cool watch-face. It's for sale here.
Posted by Mary MacArthur at 1:29 AM No comments:

Cedar Lake on a cloudy day 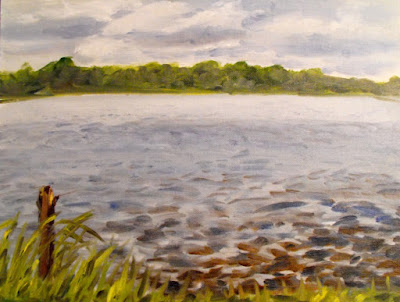 On the Minnesota trip this year I wanted to paint the lake lots of times, but I ended up only having the time to do it once. And I only had an hour to do it in. The water is so incredible, and I couldn't really capture it... I will keep working on that though.
Posted by Mary MacArthur at 8:45 PM No comments: 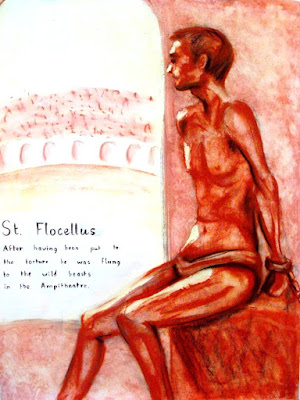 Acrylic, conte, and Copic marker.
Posted by Mary MacArthur at 9:52 PM No comments: 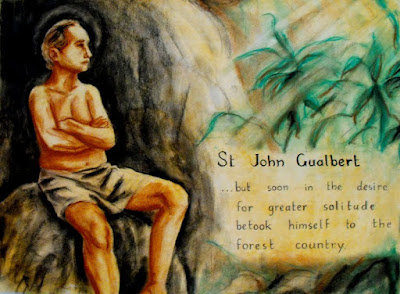 Last semester of Life Drawing class, I started drawing the models as certain saints, with excerpts from a dictionary thereof. This was the first one. Acrylic, chalk, and conte.
Posted by Mary MacArthur at 8:56 PM No comments: 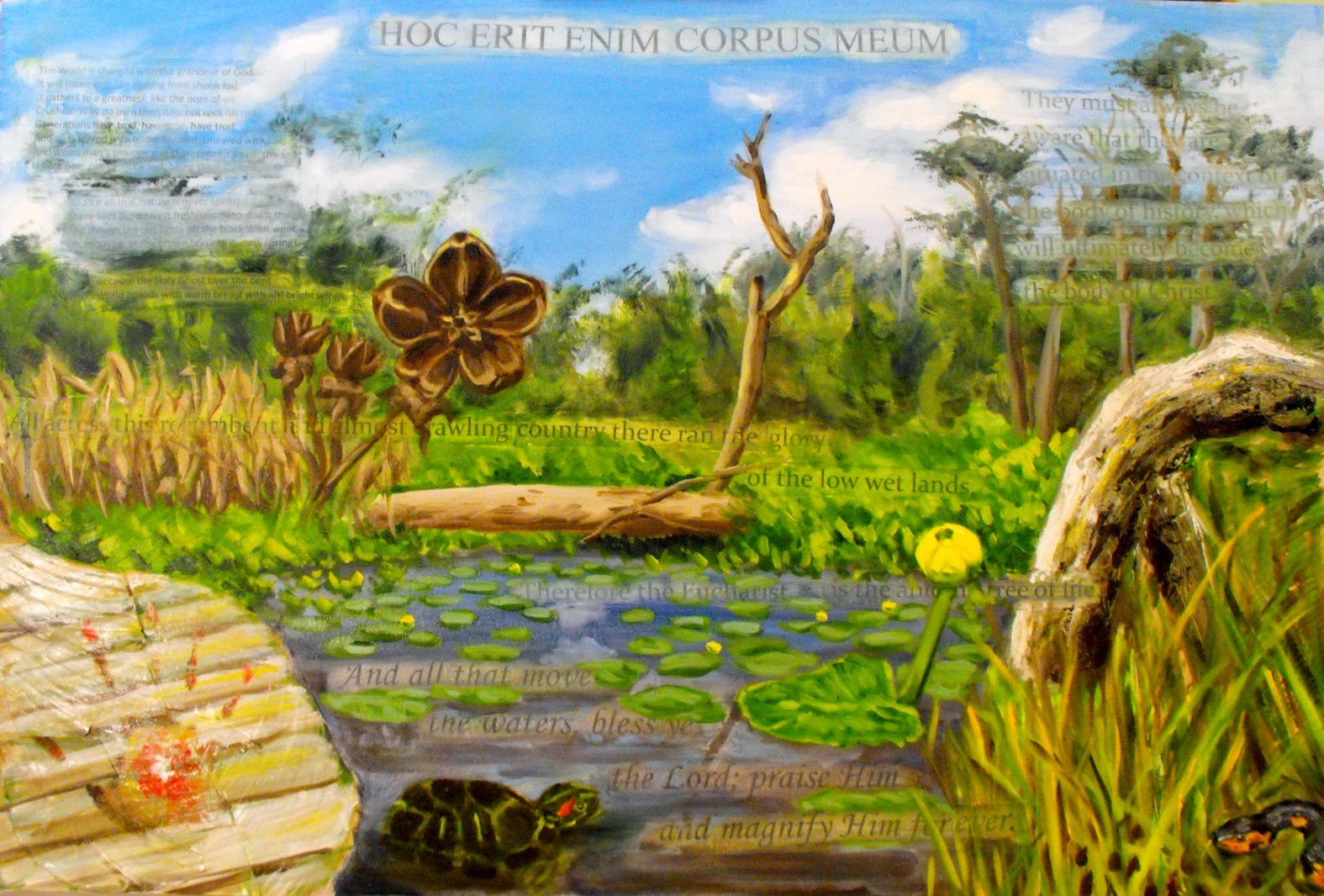 Mixed media painting with oil paint applied over collage, which I did for Theology of Creation class. The collage is both paper with quotes from the class readings and other sources printed on them, and leaves collected from the location where I spent my field studies. That place is what is portrayed in the oil paint dimension of this picture, though not utterly realistically. Things such as the five-lobed seed pod, the lily pad flower, the turtle, and the snake are portrayed larger than they would be in their spatial positions to show their detail. The combination of quotes about spiritual realities and creation and representation of a very specific, certain natural place is meant to convey the potential of the concrete things we experience to be joined in Christ.

The largest quote, "Hoc erit enim Corpus Meum," I take also as the title of the painting, and it is from the words of consecration at Mass, with an alteration: "Est" is replaced with "Erit," turning present to future tense, "This will be My Body" rather than "This is My Body." This is to mean the potential for all organic matter and all water to become the Body of Christ through the bodies of the faithful or, more dramatically, through the Eucharist. Organic material and water is what a wetland is made of. The creation of man was an extraordinary thing: matter gained a conscious spiritual being. The Incarnation is even more incredible: God became matter. While Judaism was never duallistic, it always decried idolatry's worship of material things. But now God is a material thing. This was also the reasoning behind the orthodox side in the Iconoclastic controversy; because God had become a material being, perceptible to the senses, the Old Testament prohibition on images had passed away.

Something not "natural" is included in the painting, another work of man besides the words of man (and God): the wooden walkway in the lower left. The slightly skewed perspective on it is to highlight this difference. Yet it is built of wood and the image thereof is painted on the collaged leaves, showing the natural source of everything we make. It is a bridge of sorts, and this fits well with man's place as the bridge between God and matter, and Christ as the bridge between God and man. His Vicar the Pope's title of "pontifex" means "bridge-builder." Thus my handprint on this walkway, my way of signing this piece, signifies the signature of man (a phrase G.K. Chesterton used to define art.) The red in the center of the hand evokes the wounds of Christ, to Whose Passion we are to be united, and the white at the center evokes a hole, like the wounds again, through which light can come and also the Eucharist Host as in a monstrance. We are to be monstrances to the world through the work of our hands, bearing and being the Body of Christ and uniting all reality to It. By using my own hand to portray this I do not claim I am any sort of example of it, but they are the only hands I have and so I pray I may use them thus. In the end, this painting is an effort to do so, by communicating the concept of the universe we perceive in its beauty to be joined with and through us to God.
Posted by Mary MacArthur at 8:01 PM No comments: