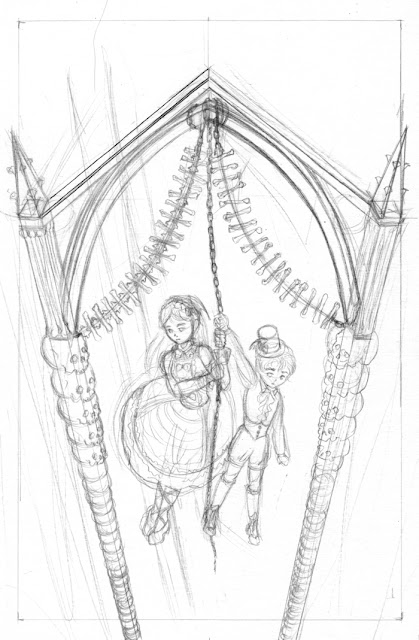 Every month I don't get a Batman: Decadence chapter done, I try to post a preview for the chapter in progress. As it's been far, far too long since I did finish a chapter (March of last year,) I thought this preview should be bigger than usual, a whole page, the chapter cover in sketch form.

It's a difficult thing, making time for all the drawing one wants to do, when there's the drawing one was hired to do as well as the day job and the housework. I remember fondly the days when all the time that wasn't taken up by schoolwork was totally free... But anyway, I keep working at getting up earlier and cutting down on internet browsing and organizing work schedules more efficiently. Hopefully, the chapter will be ready next month, so that the time between chapters will not stretch to over a year.
Posted by Mary MacArthur at 1:09 AM No comments:

As I have stated my intentions to review things to be helpful to Christian parents, and as I am an avid fan of DC superheroes and especially of Batman, I might be expected to view and review The Lego Batman Movie. But I am not going to, for the reasons I will soon tell. I do not envy professional film critics, who must watch a wide range of movies that may be of interest to their readers, however unpleasant the experience may be for themselves. As I have not and will not watch it, I am not qualified to review it per se, but I vehemently disrecommend this movie to everyone, especially children.

I loved to play with Legos as a child, of course. But as they left off making their own original mileaus such as Aquanauts and Johnny Thunder and started overwhelmingly just making licensed tie-ins with popular franchises, my taste for them soured.

I also don't like that this movie is not made by any of the regular people who have produced so many excellent DC animated movies and shows, like Sam Register, Lauren Montgomery, Bruce Timm, James Tucker, Brandon Vietti, etc. Similarly, like many big-budget animated movies, it stupidly eschews casting voice actors in favor of big-name live actors, not acknowledging that the talents required are quite different, and contributing to voice actors' undeserved general second-rate status.

But these things are insignificant in comparison to the nods to sodomy they sneak in there, twisting and violating these characters. This article names an instance:


For example, two men adopting a son together sounds like a dream come true to Richard, the orphan Bruce Wayne adopts without telling him he’s Batman. That’s why, when Richard hesitates to board a bat vehicle without Bruce-Dad’s permission, Batman tells him he and Bruce-Dad share custody of him. Richard doesn’t need Bruce-Dad’s permission; he has Bat-Dads!
This solution thrills Richard, who unblinkingly climbs aboard (and later becomes Robin). The bubbly young man is tickled as he spells it out for viewers: Yesterday, he didn’t have a dad, and now he has two dads! Viewers may laugh, because they know it’s a farce: Bruce-Dad and Bat-Dad are one. Richard doesn’t learn the truth until the end, when Bat-Dad pulls off his mask to reveal Bruce-Dad’s face and tells Richard to call him “Dads.”

And I'm not sure the article writer realizes, there's additional insidiousness in what they did to Dick in this film. This is Dick Grayson, the first and most well-known Robin: 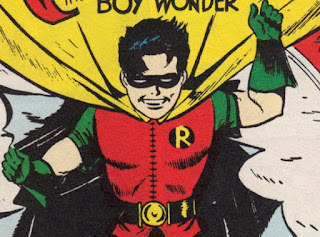 And this is Carrie Kelley, the third Robin in the very dark and violent Dark Knight Returns alternate continuity:

She is a girl.

And this is how "Dick Grayson" looks in The Lego Batman Movie: 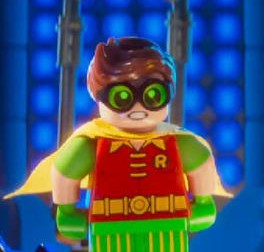 Much more like Carrie than like Dick. They made over a boy to look like a girl, but in such a way that you would only realize that's what they were doing if you know a part of the source material that most parents are rather unlikely to know. THIS IS SICK.

Disgusting. In 1954, Fredric Wertham, in Seduction of the Innocent, made the false accusation that there were homosexual themes hidden in Batman. It seems this movie wants to make his slander true.
Posted by Mary MacArthur at 7:25 PM No comments:

Daughter of Danger - what constitutes immodesty in art?

A while ago, the fourth book in John C. Wright's Moth and Cobweb series, Daughter of Danger, came out. I haven't read any of this series but I want to; but they haven't come out in paper yet, only as ebooks, which I don't read. I await the paper editions.

Anyway, there was a bit of a fuss kicked up over the cover art by Scott Vigil, which some called too risque and immodest. Here it is: 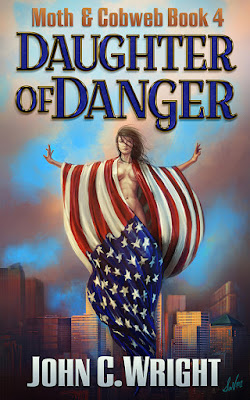 I myself think it's beautiful, and it reminds me of 19th century American patriotic art, like these: 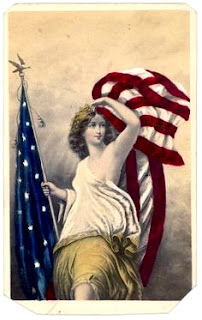 So I want to raise the question of the human form in art and the morality thereof. My mother was an art teacher and is a huge fan of Michaelangelo; we grew up being taught that the human body was a creation of God that artists portray for the sake of its Beauty, and that nudity was not necessarily sexual at all. But there were those in our parish and homeschool group that didn't agree, and since I've started my career as an illustrator, I've been told a few times that my drawing and painting women with legs and cleavage/breasts exposed is a scandal and an evil. (For whatever reason, there doesn't seem to be a problem with exposed chests and thighs of men.)

I do of course recognize that there is such a thing as salacious art meant simply to arouse lust. But I don't think all exposition of the female body is such. In this post, though, I'm more inviting opinion than arguing for my own. (I may elaborate on mine later.) So please let me know what you think!

One thing I observed, however. There were families in our homeschool group that were obsessive about modesty and almost puritanical regarding things like comics, anime, and video games. And it is, overwhelmingly, the children of those families who are now, unfortunately, living in fornication. Maybe it's rebelliousness or in-for-a-penny-in-for-a-pound mentality; of course I don't know all the factors or possible reasons, but it is a definite pattern.
Posted by Mary MacArthur at 8:13 PM No comments:

Labels: art criticism, art not by me, books

My latest column for the Aitkin Independent Age is about how happy I am that we have the president we have instead of the one that the abortion-worshipping, Islam-supporting, anti-Christian globalist elite wanted for us. There had been several letters to the editor and a couple columns lamenting the inauguration, so I thought the way that the majority of Aitkin County actually voted deserved some representation.

In the wake of the inauguration, newspapers and the Internet were filled with lamentation, claiming it will be horrible if President Trump does what he said he would, but then immediately gloating he surely wouldn’t do it after all. If so, what was the problem? However, these first few days, he already restored the Mexico City policy, got us out of TPP, presided over the first joint American-Russian attack on ISIS, and several other works. He’s doing what he said and I am glad of it.


I am glad that someone who said that my church must be made to change its beliefs will not be president. I always thought Hillary Clinton would win, so I expected that soon, any public expression of my beliefs, especially the belief that homosexuality is immoral, would be outlawed as hate speech. I didn’t trust Trump for a long time, thinking he was stupid and sure to lose to her. I gradually saw I was wrong and I am glad.


Read the rest here.
Posted by Mary MacArthur at 3:56 PM No comments: