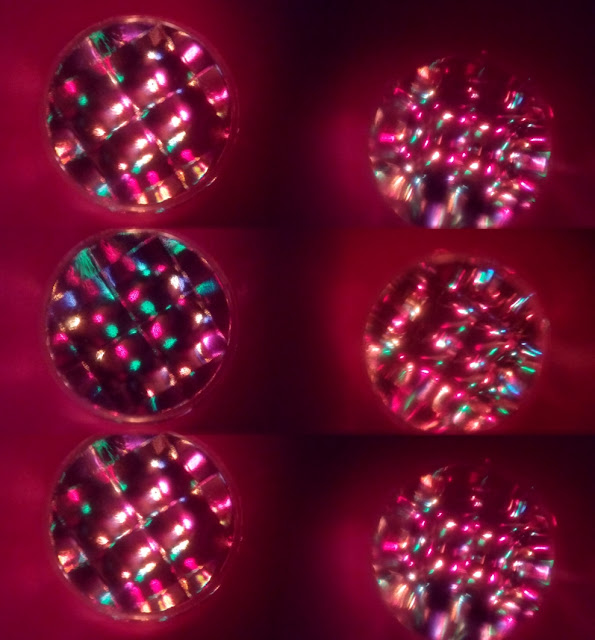 Got one of those bug eye lens toys in a Christmas cracker, put it over the lens of my cell phone camera and pointed it at the Christmas tree!

Jesus, the Ransomer of man,
Created ere the light began,
Didst from the sovereign Father spring,
His power and glory equaling.

The Father's Light and Splendor Thou,
Their endless hope to Thee that bow,
Accept the prayers and praise today
That through the world Thy servants pay. 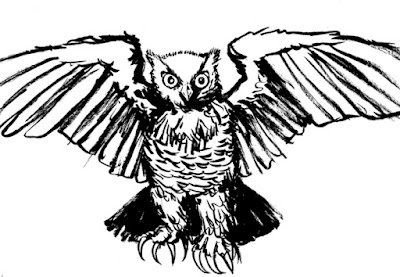 Working on concepts for the upcoming Bovodar and the Bears graphic novel; I thought this owl looked really cool.
Posted by Mary MacArthur at 1:54 PM No comments:

This is an art blog, but I do sometimes talk about the Catholic Faith. It being the truth of reality, I must recognize it in all I do and strive to express it in my art, toward the glory of God.

The Catholic Church is in turmoil presently. Revelations of the extent of sodomite activity in the clergy, the proliferation of the Kasperite heresy, and the continuation of the Modernist heresy are all scandalizing the faithful. Many contradictory statements made by putative Pope Francis, some of them heretical, do untold damage.

I am not here stating my opinion on the validity of Pope Benedict XVI's resignation, but I am stating the following, which is a certainty:

If you believe Pope Benedict XVI's resignation to be valid, you should refer to him as Joseph Ratzinger.
Posted by Mary MacArthur at 11:41 AM 3 comments:

Here's an old drawing, done when I was three years of age:

Sophia Institute Press has come out with a new edition of Around the Year with the VonTrapp Family by Maria von Trapp, on whom The Sound of Music was based. It features design elements and cover illustration drawn by me! 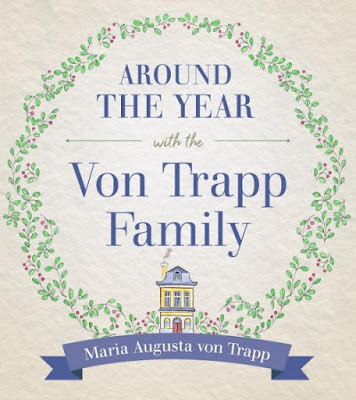 I based that little house there on the main facade of the real Trapp estate.
Posted by Mary MacArthur at 12:06 PM 1 comment:

Behold! Bovodar and the Bears in color 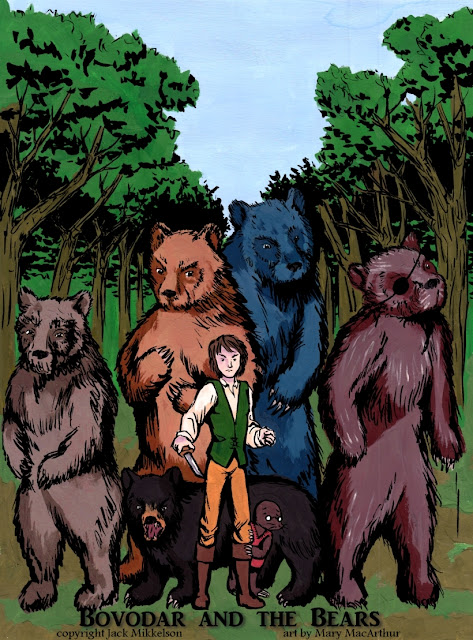 The color version of the group portrait of the heroes of the upcoming graphic novel Bovodar and the Bears by Jack Mikkelson, art by Mary MacArthur, based on the young adult fantasy novel of the same name.

Most comics these days are colored digitally; with very few exceptions I don't do digital, so with my other graphic novel project I'm doing pencils and inks and there will be a colorist, but with this, my visions from reading the book were such that I wanted control of the color too, so I determined to learn a traditional method that would produce fairly simple, flat colors that would reproduce well. So I went with gouache!

And to keep the blacks of the inking pure black, I did not paint on the same page that I inked, but traced the outlines onto another piece of paper and painted that, and combined the two digitally. I think it turned out well!

Bovodar and the Bears is a really amazing story, whimsical and heroic. I don't know when the graphic novel will be finished and released, but please look forward to it, and in the meantime you can get the novel here!
Posted by Mary MacArthur at 2:12 PM 2 comments: