I talked before about how stories of the next generation of heroes are terrible when told according to the SJW Narrative. I haven't seen The Last Jedi but I've read enough, and heard enough from friends who are devoted fans of Star Wars to know it fits the bill.

I earlier imagined how the next generation part of Ace Attorney would be if it had been written according to the SJW playbook. Now I thought of another, more specific application that shows how much The Last Jedi despises the past.

What if there were a Legend of Zelda game where you played as a young Princess Zelda, growing up in the castle under the guidance of your mother the queen, also named Zelda, listening to her wonderful stories of the hero that saved the kingdom several years ago. She even shows you the hero's sword, the blade of evil's bane, the Master Sword, kept safe in the treasure vault.

Then one day, darkness arises from the desert, monsters start appearing, and Ganon arises to attack the castle. In a desperate flight, Queen Zelda takes the Master Sword and entrusts it to the young princess and tells her to find the hero in the forest and beg him to come to their aid.

And so Princess Zelda sets off on her quest. There would be monsters and dungeons; you couldn't use the Master Sword so it could make for some creative gameplay. And then, finally, you find the hero, an older Link than is usual for the games, but still capable of saving the kingdom as he did years ago. Princess Zelda bows in respect and offers him the Master Sword.

And he throws it into a pit.

A Zelda game treating its lore like that would be horrendous.

Horrendous.
Posted by Mary MacArthur at 11:00 AM No comments: 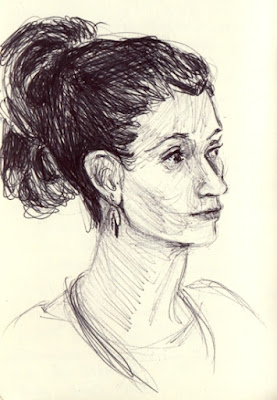 Ballpoint sketch of a lady who's running for Congress around here. Won't vote for her, though.
Posted by Mary MacArthur at 6:02 PM No comments: 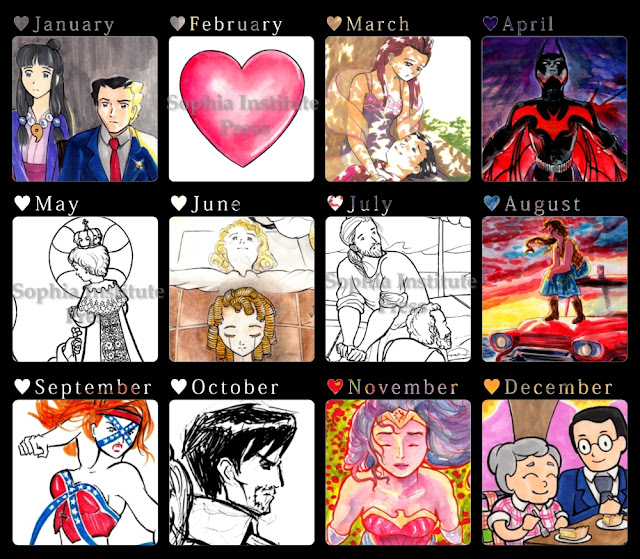 Last year, I finally started to get my day job and art work into harmony, following my resolution to draw more than I did in 2016. To that end, I started off the year with a twelve-drawing tribute to the significance of Christmas in Ace Attorney, commemorating the fact that Christmas 2016 is when the final case of the first game takes place.

I did a lot of work for Sophia Institute Press' Spirit of Truth catechesis series, which will come out in Summer.

I started supporting artists on Patreon, namely the webcomics Chateau Grief and The Silver Eye.

Most exciting of all, and something that will come to fruition and have a greater effect on 2018 than 2017, I began working with Jon Del Arroz on the upcoming steampunk comic Clockwork Dancer!

Then I ended the year with another twelve-drawing project (not counting the cover), a silly little Batman and Superman story, All's Fair at the County Fair.

So my resolution for 2018, (as well as sewing more) is to focus on big projects: Clockwork Dancer; upcoming webcomic Paper Doll Veronika; returning to my fancomic Batman: Decadence; and another collaboration with a writer.
Posted by Mary MacArthur at 4:27 PM No comments:

Labels: progress review, ramblings, things that happen to me 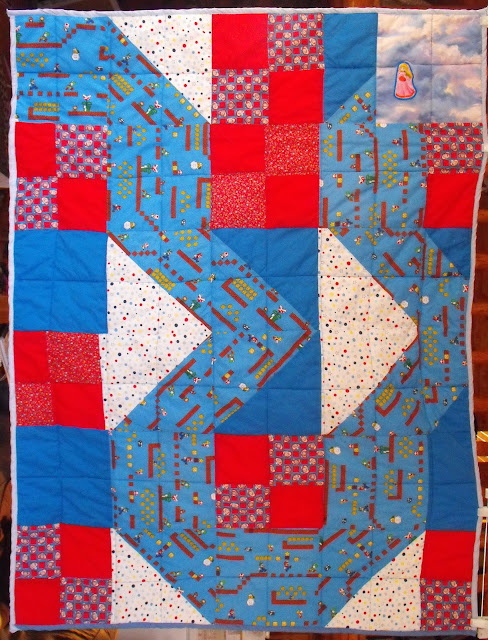 I made this quilt for my toddler nephew for Christmas. I left the image quite large so if you click it you can see the details. My idea was that kids really like to follow pictorial paths. At least, I did.
Posted by Mary MacArthur at 10:00 AM No comments:

All's Fair at the County Fair 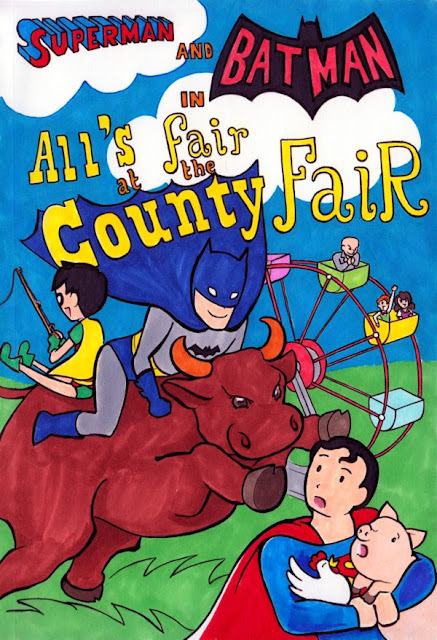 A Visit with Ma 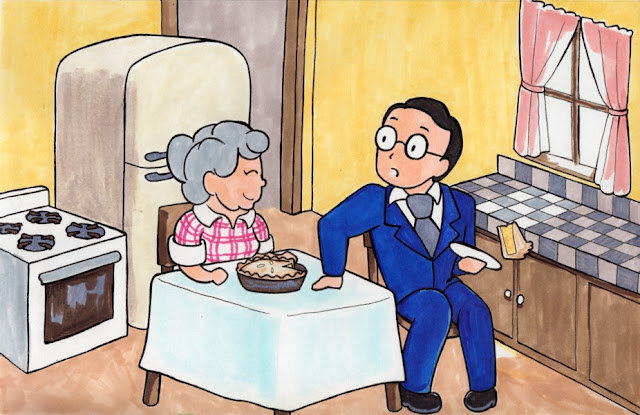 One day Clark Kent is visiting his mother on the farm in Smallville. She gives him a slice of her famous apple pie and tells him about all the local doings.

"You know that big ranch that's been for sale for years?" she says, "Someone bought it, and a thousand head a cattle to put on it."

"That man from Gotham, rich fellow, didn't you say he was a friend a yours?"

At the Billionaires' Club 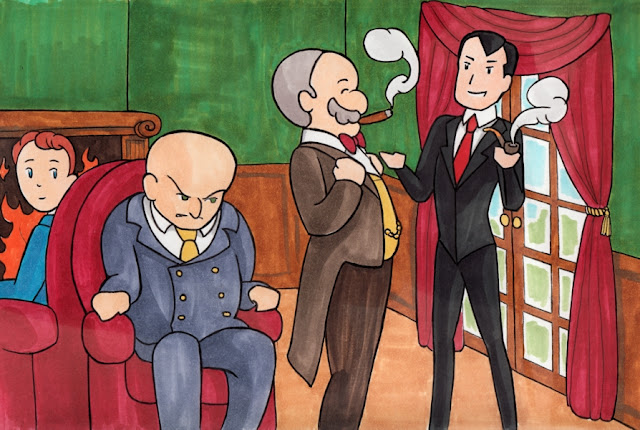 Meanwhile, at the fancy Billionaires' Club, Bruce Wayne is talking about his new ranch to the fellows. Lex Luthor is particularly interested and also a bit incensed. He can't allow that whelp from Gotham to outdo him as the classiest billionaire! He determines to buy his own beef ranch in the very same vicinity. That'll show Wayne! 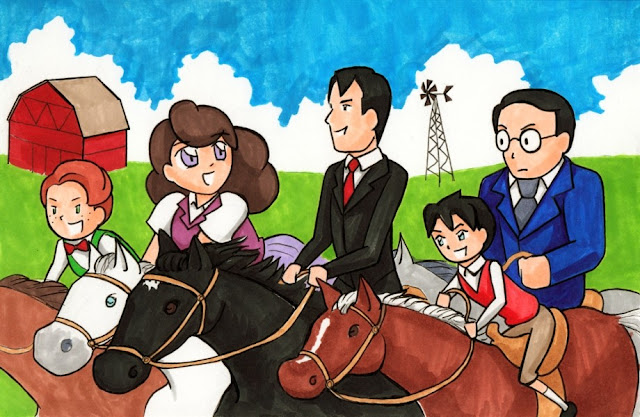 Bruce Wayne has invited Clark Kent and his friends Lois Lane and Jimmy Olsen to spend a week on the ranch with him and his ward, Dick Grayson. He acts all surprised like he had no idea this was Clark's hometown. What an extraordinary coincidence! But he had heard rumors that, after Metropolis, this is where Superman shows up most often. What a funny thing. Clark gives him covert frustrated glares while Lois and Jimmy take in all the ranch has to offer. 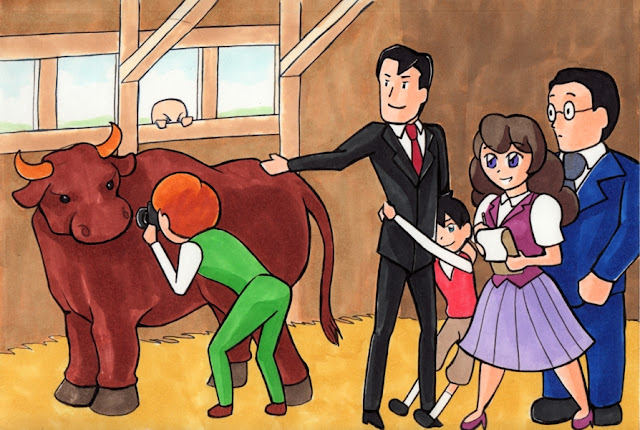 After the fun time riding, Bruce leads everyone into the barn where he unveils something very impressive: a prize steer! And he also unveils his grand plan: to enter it in the upcoming county fair. But they are not unobserved... 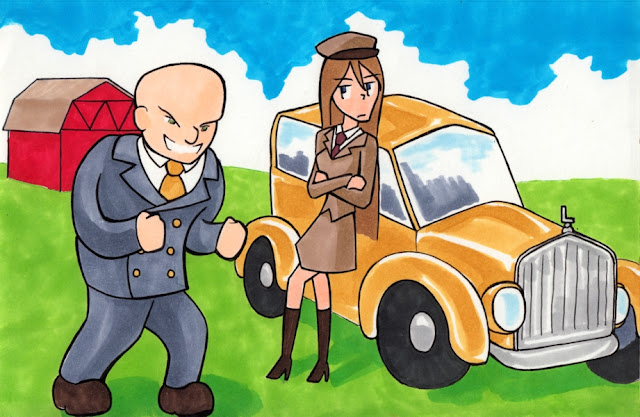 Lex Luthor was eavesdropping on the conversation in the barn. He rushes back to Mercy at the car and tells her they can't let Wayne beat them: they're going to enter a steer in the county fair too! 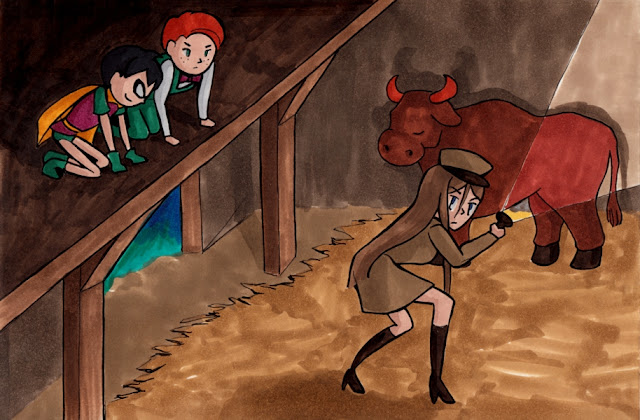 To make extra sure that Wayne's steer won't beat his, Luthor sends Mercy to sneak into the barn and cut its tail off or some such devious sabotage. But Jimmy gets wise to this and tells Dick when she's coming. Dick says he has a friend who can help: Robin, the Boy Wonder! Together, Jimmy and Robin stop the saboteur and send her packing. 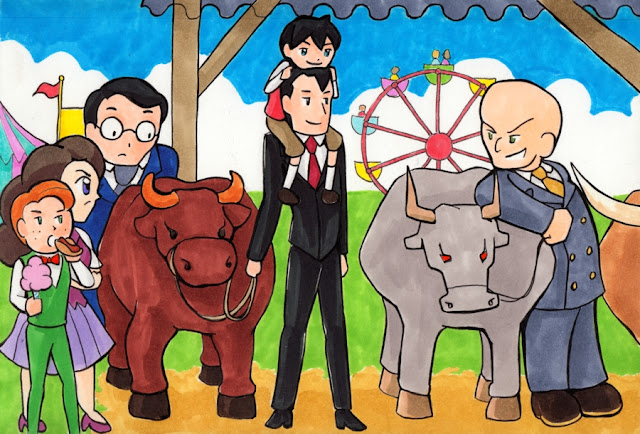 At last, the day of the Fair has come! There are rides, and food, and games that everyone has a great time with, (though Clark, as he has throughout, is rather put-upon, and it's funny) but what everyone is waiting for most eagerly is the cattle judging. The judge looks over all the steers and is about to announce the results. He starts with Third Place, which goes to... 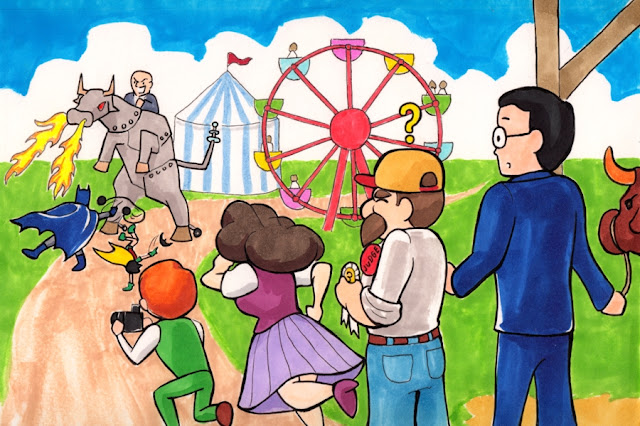 Third Place goes to Lex Luthor! Luthor is furious that he didn't get First and activates a device--his steer is revealed as a robotic menace of destruction! He jumps astride, takes the controls, and rampages though the fairgrounds. Bruce and Dick are suddenly nowhere to be found, and Batman and Robin emerge to battle the biomechanical bovine beast! Lois and Jimmy rush forward to photograph the fracas, leaving the reins, literally, in Clark's hands. The Dynamic Duo gets the upper hand over Luthor and his mechanical bull and hits the weak spot, causing the robot to explode. But the explosion knocks over the Ferris wheel, and it's going to fall right on Lois and Jimmy! This looks like... 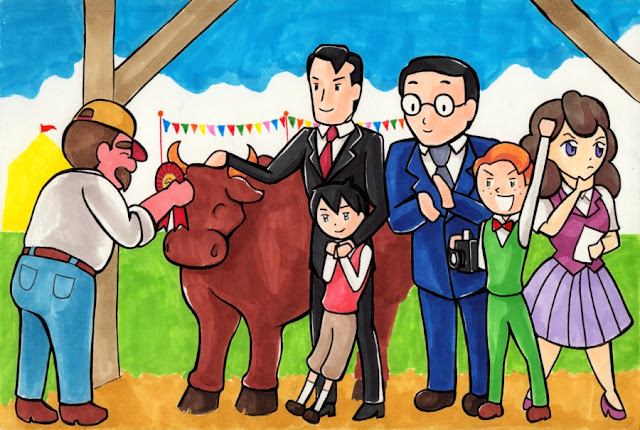 Everything's calmed down now, and Superman, Batman, and Robin mysteriously disappear before Lois can get a statement from any of them. Clark, Bruce, and Dick show up again and everyone returns to the judging pavilion to hear the rest of the winners. Second Place goes to Bruce Wayne!

But then, who gets First? 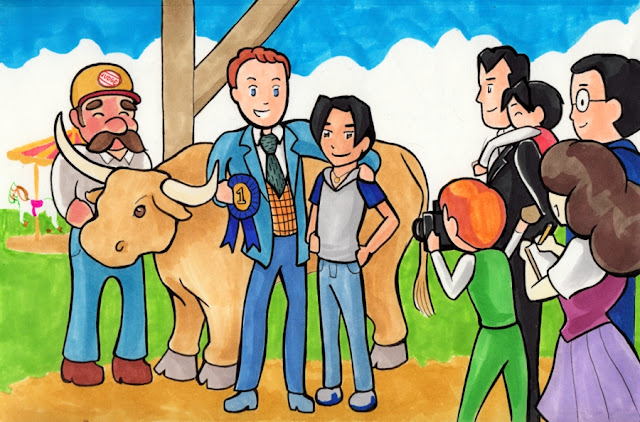 Ah, there was another member of the Billionaires' Club who was also inspired to follow Bruce Wayne's ranching example, though this one not out of envy. Plus, he has an assistant from Texas, so of course they'd raise the best steer of all... 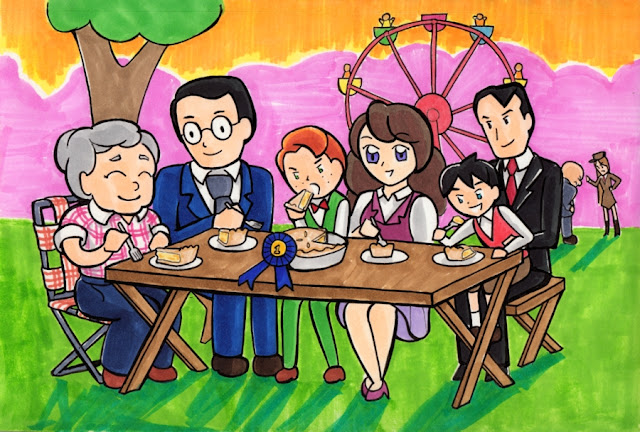 So, the World's Finest didn't manage to win the top place in the cattle division, but someone else had entered her famous apple pie in the baked goods division and brings home a blue ribbon after all. After a wild day at the Fair, everyone gets a slice of victory.