My latest column at the Aitkin Independent Age is to raise awareness about a horrible scandal which will most probably only ever be properly investigated and resolved if there's great public outcry. It's known as "Pizzagate" and this article is a good introduction. It's disturbing.

For my column, I stick with things that are citably known and take the art angle. This being an art blog, I might be expected to show the artworks that I'm talking about here, but I'm not going to. I'm not having that on my blog. There are links in the above-linked article if you think you should see for yourself.

In college, I attended the Glassell School of Art. Along with working at the Age, I’m also a freelance illustrator with a few books and a board game published with my illustrations. Art is the main thing I want to do with my life, unless I get married, in which case the main thing will be, hopefully, raising children, but I’ll still do art as well. In trying to be an artist, one has to consider some deep questions, such as: What is the purpose of art? By what standards is it to be judged? Can it be morally bad?

Most believe the purpose of art is either inspiring and ennobling the human spirit or being a vehicle of self-expression for the artist. These aren’t mutually exclusive, but which one you take as your main purpose greatly affects your art philosophy. Those who see art mainly as self-expression often believe there is no right or wrong in it.

Much speculation arose from what Wikileaks released from the emails of John Podesta, Hillary Clinton’s campaign manager. The suggestion that Podesta and his brother, Tony, may be involved in a pedophile ring is one of the more shocking. No hard proof has been found so far, and the New York Times and Washington Post dismissed the idea as “fake news,” Twitter and Reddit censored discussion of it, and the Age even received a satirical letter, published in the Nov. 16 edition, comparing its likelihood, along with other alleged corruption, to that of the planned Mexican border wall being funded by unicorn horns. However, journalists like David Seaman, formerly of the Huffington Post, are still investigating.

What does this have to do with art and its morality? One of the things used to bolster the claims that something is perverted about the Podestas is Tony’s taste in art.

Read the rest here.
Posted by Mary MacArthur at 9:46 PM No comments: 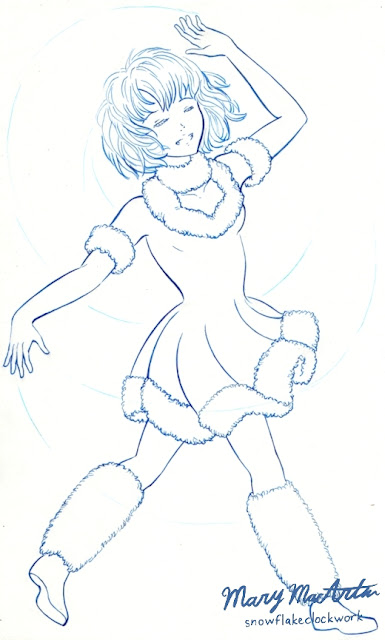 Lineart for a little drawing of DC superheroine Ice, which I will color with nail polish, like I did this picture.
Posted by Mary MacArthur at 10:17 PM No comments: