Some in-process photos of my Aithre kai Gaia ink painting. 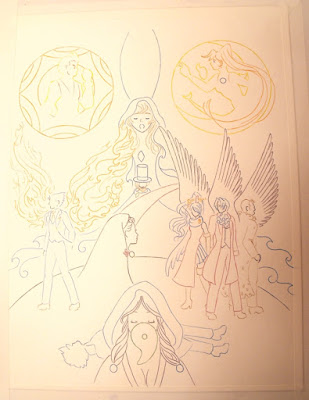 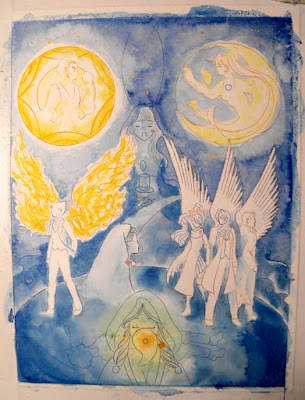 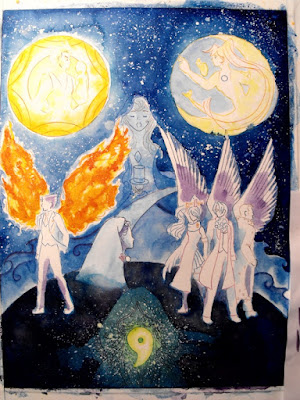 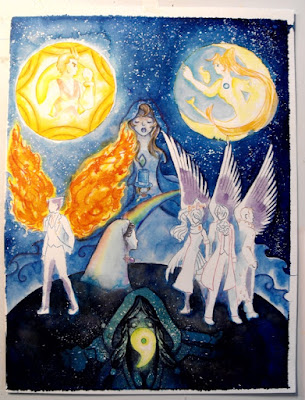 Also, note the "Stories" link now in the top bar. There I shall put links to all my available works of fiction: short comics and fanfic, and hopefully some day in the future, first chapters of novels.
Posted by Mary MacArthur at 5:35 PM 1 comment: 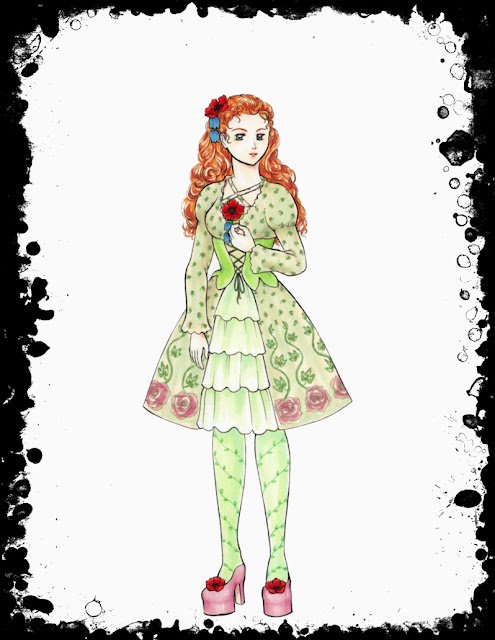 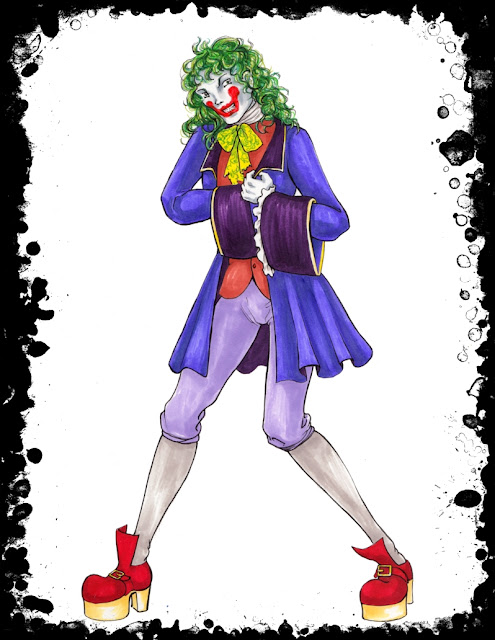 I've been at this comic for two years now but only gotten four chapters done. It naturally has to take a back seat to paying work, but I'm sure there must be ways I can boost efficiency...
Posted by Mary MacArthur at 10:57 PM No comments: 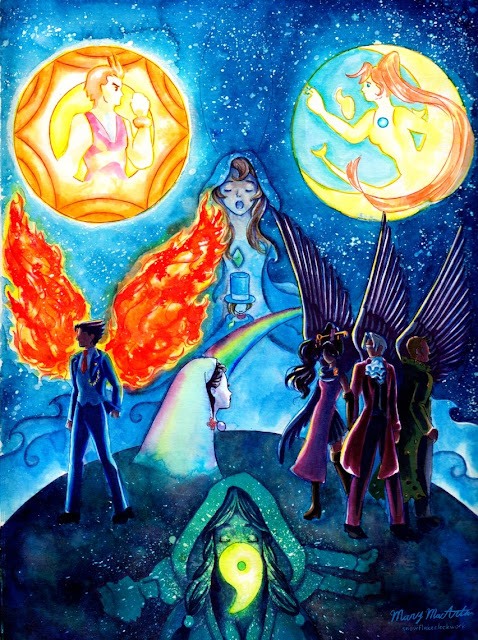 The English-version names of characters in Ace Attorney have a wonderful mythological resonance. Phoenix, of course, then Apollo, Athena, Thalassa, and you realize that a phoenix is a bird of Apollo, while the Yatagarasu is the bird of Amaterasu, the Japanese sun goddess. This painting is a symbolic tribute to that, as well as practice for an upcoming picture that will be one of the most awesome things I've ever drawn.

I've posted fanart of video games here before, but I wanted to talk about it a bit now.

I don't know how much of a regular audience this blog has. My father and mother look at it, I know that much, but beyond that I'm not sure. But I have the impression that, mainly due to the Liturgical Calendar Coloring Book, much of what audience there is seems to be Catholic homeschooling mothers. That's pretty cool; I think those are one of the few things in our civilization that might have some hope to save it. And so, conscious of the importance of the role of my apparent audience, I want to exhort them about something.

I have seen many articles aimed at this same audience, from Catholic and other Christian sources, online and in print, about problems of our time and culture, many of them have been quite good. But many take something for granted with which I completely disagree. I'm thinking particularly of ones about the decline of manhood and the decline of beauty and wholesomeness in the culture.

What these articles take for granted is that video games are altogether bad: at best an immature waste of time, at worst a violence-inducing immorality like unto pornography.
With this I completely and vehemently disagree.

Read more »
Posted by Mary MacArthur at 4:00 PM No comments: 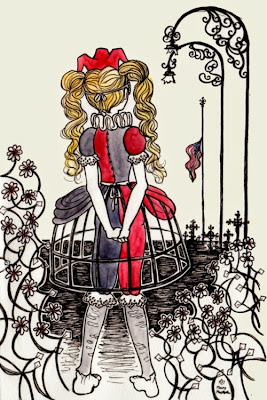 In my review of Batman v Superman, I said, "Since this movie is part of a large upcoming set of Justice League films, one cannot judge this story wholly yet, and parts of that may yet be corrupt or simply badly done." Well, this part is somewhat corrupt and quite a bit badly done.

How good is it: A few solid performances in an overall messy, flawed, not-well-written-or-edited movie. A lot of pointless explosions and posturing; and it seemed to be trying to copy recent Marvel films, with its overemphasis on not-very-funny banter and a scene after the first part of the credits.

For whom do I recommend: Definitely unsuitable for children under the age of 15-17 or thereabouts, because of lines and scenes indicating fornication, suggestive dancing and content with overt sexual overtones, though there's no direct portrayal of sex; also swear words and some moral unclarity. I wouldn't really recommend it to anyone, but if you're a DC fan interested in this current continuity of movies, as I am, you probably should see it to get the complete picture.

Full review is below the cut, and has only one, not very major spoiler, given in unspecific terms. 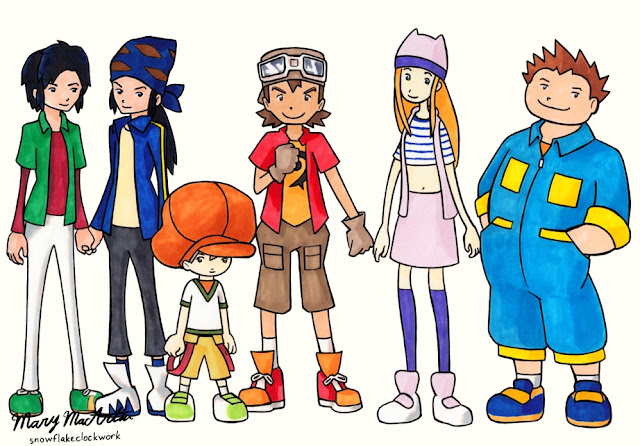 Like this picture, but with the Season 4 cast.
Posted by Mary MacArthur at 9:06 PM No comments:

In my latest column for the Aitkin Independent Age, I go from local to national to civilizational politics.

I don’t have an opinion on the Aitkin school referendum. I don’t own any property that would be taxed nor have I any children and if I did I would home school them. I’ve been inside the high school and read all the Age has printed on the matter, but I still don’t feel like I know enough to make a judgment.

Therefore, I’m going to rely on the judgment of someone else, who knows the school, the students, the district and the administration very well, whom I admire and whose opinion I trust completely; and I will simply vote however he says I should.

Some might call this a dereliction of responsibility, that the power of the vote should never be based on anything but one’s own judgments. But representative government means entrusting the right to participate in government to others all the time. We have referenda on the local and state level but not national; this is not a direct democracy. We vote for politicians and are asked to trust their decisions rather than make decisions ourselves. I trust the person I mentioned infinitely more than I trust any politician, so I have no problem deferring to his judgment on this referendum.

This brings me to the current presidential race, the most intense and polarized of my experience.

Read the rest here.
Posted by Mary MacArthur at 6:55 PM No comments:

Fiction
The Two Towers by J.R.R. Tolkien
The Heretics of St. Possenti
by Rolf Nelson

The Gulag Archipelago by Aleksandr Solzhenitsyn