"Please give it back" 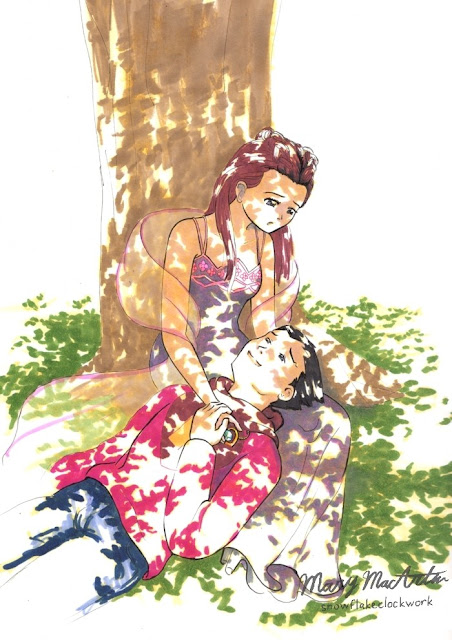 Scene from the backstory of Ace Attorney: Trials and Tribulations. He doesn't know it, but she's pleading for his life!

I'm quite pleased with how the leaf shadows effect turned out. And I also really like how it looks in greyscale: 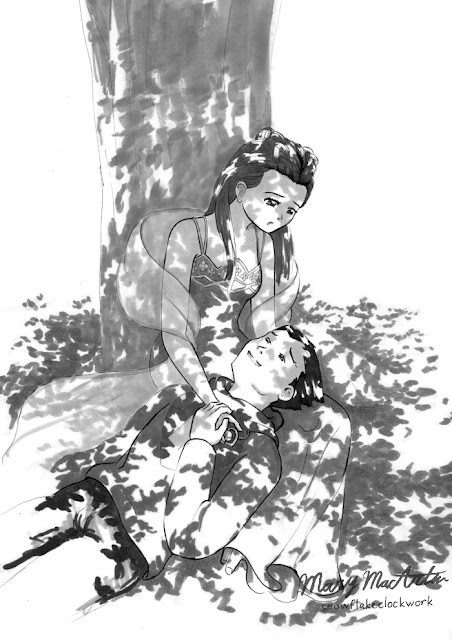 My latest column for the Aitkin Independent Age is about a bookish daydream of mine:

I like my jobs, at the Age and doing freelance illustration, and have no desire to stop anytime soon, but lately I’ve also been daydreaming of running my own business. It would be somewhat unusual and probably make very little money: a private library.


It would work basically like a normal library: people could borrow books. The difference would be that there’d be some form of payment for it, as the library would not get any government funding, so wouldn’t be controlled by a board and its management and books would be entirely up to me.


First inspired by the fact that my sister couldn’t find King Lear at the public library, my dream library would focus overwhelmingly on the classics, books that have stood the test of time, often centuries. Homer and Hesiod, Plato and Aristotle, Augustine and Aquinas, Dante, Chaucer and the Pearl Poet, and everything by Shakespeare, to name a few. In more recent works: Jane Austen, Charles Dickens, the Oz series by L. Frank Baum, Chesterton and Belloc, poetry by Gerard Manley Hopkins, Alice Meynell, Alfred Lord Tennyson and Emily Dickinson, novels and poems by Rudyard Kipling and Lewis Carroll, and others. I’d particularly want hardcover editions, engraved illustrations, embellished covers.

I mention wanting to do more reading. To urge myself thusly, I put a little Current Reading list over there on the sidebar. And as I finish books, I'll put them on a yearly list page so I have a record. This is mostly a journal-like thing for myself; like the above dream library, I don't know that anyone else would be interested, but it should be fun!
Posted by Mary MacArthur at 6:59 PM 1 comment: