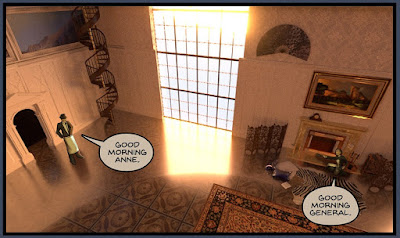 The Patreon for Chateau Grief is here.
Posted by Mary MacArthur at 4:34 PM No comments: 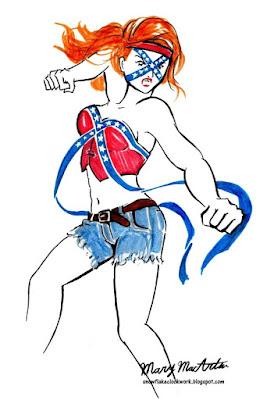 UPDATE: The project has been launched!
Posted by Mary MacArthur at 2:01 PM No comments:

I didn't always put them here, but I'm ceasing to post monthly previews for my Batman fancomic anywhere.

The monthly preview system is NOT helpful towards making progress on the next. Because of it, I had been doing as follows: Working from the script I have written, I thumbnail a page, then, because I need something that looks relatively polished for a preview, I start drawing said page, a little each day. On the 25th of the month, I scan some part of the page I'm working on and post it as a preview. It's a frantic, discouraging catch-up game, and it's not working. It does not encourage me to work faster, and it's disjointifying the flow of the chapter. The whole chapter NEEDS to be thumbnailed before starting on the pages.

Ideally of course, I'd have finished the thumbnailing and be well underway with the pages by the middle of the month. But it was always the case that, being a fancomic, Decadence would have to take a back seat to creative works that I could make money from. In the past, these were mostly freelance jobs, but right now I'm on the cusp of launching some projects that would make money and would actually be stories from my own creative vision: a comic in collaboration with a significant author and an original webcomic. The comics industry is in upheaval. Now is a key time to plant new seeds. I definitely still also want to tell my story inspired by the legend that is Batman, so I'm getting rid of its monthly preview so that I can work on it more steadily and efficiently alongside all these endeavors. Thank you for your patience and attention.
Posted by Mary MacArthur at 8:07 PM No comments:

Recently, I started contributing to some artists on Patreon! I think it's a really fun system--although since it has kicked people off for being politically incorrect, I will not be using it myself once get my original webcomic up and running. I hope to be using Freestartr! But Patreon is not so evil that I'm going to forego supporting these storytellers (and getting their rewards) just to spite it.

Anyway! One of the artists I'm supporting is Laura Hollingsworth and her comic The Silver Eye. It's a fantasy adventure that's confusing on the first read, rewarding on the second, and very funny on both.

Here's an excerpt that's both characteristically funny and gives the general premise:

A fanart of it I did recently won second place in a contest she held: 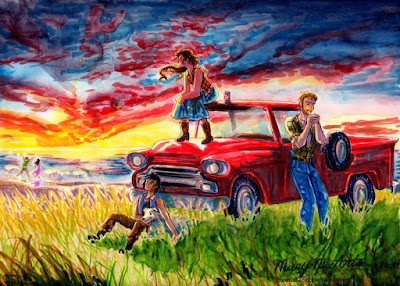 There was a cash prize, so... so far, I've actually gotten more money from The Silver Eye than I've contributed to it. But even were that not the case, the rewards are really worth it; there's loads of interesting stuff that's perfect for the fact that these are the sort of characters that you want to know more and more about and see in all kinds of situations.

The Patreon page is here!
Posted by Mary MacArthur at 9:00 AM No comments:

My latest column for the Aitkin Independent Age is about Hurricane Harvey:

Houston, Texas is my hometown, where I was born and lived until three years ago. Needless to say, I’m paying attention to Hurricane Harvey. Some of my family had to evacuate for higher ground, others are dry at home but floods cut them off from the rest of the city. My heart goes out and it may seem strange but I wish I could be there, not just to help but to experience this.


Going through a hurricane is like nothing else. Before and after Hurricane Ike in 2008, we took walks. It was unnaturally quiet yet the people one did meet were very friendly and talkative. The combination of strong silence and greater conviviality is unique. As the winds approach, trees move in ways you never thought they could and the wind echoes all night. After Ike, we had no power for two weeks. My job was a dishwasher for a household of priests; water and gas worked so we carried on, washing dishes by hand by the light of altar candles. I was amazed how quickly things got back on track, both with individuals, trooping out to buy chainsaws and clear the roads, and the city, setting up alternate signaling at broken traffic lights and hauling off debris. Now I see rescuers carrying people of all ages and races to safety, my acquaintances using social media to offer places to stay, vehicles to help.


There is ugliness too, looters, who reportedly shot at the “Cajun Navy” – Louisianans who came to help. Racists on Twitter encourage these criminals, one saying, “Please only loot white owned stores and stores owned by Trump supporters” and some political cartoons mock the victims as racist hicks. It figures, when shortly before, a man was arrested planting a bomb on the statue of Richard Dowling, a Confederate officer, and the communist group “Antifa” (who were rioting in Berkeley while groups they call fascist were helping hurricane victims) made an effort to destroy the Spirit of the Confederacy statue.

If you want to give alms, it's always best to give directly to people in need rather than to bloated organizations. So here's a Catholic homeschooling family that my family knew, very active in pro-life work, who lost their house to the flooding. Go here to help.
Posted by Mary MacArthur at 7:13 PM No comments: 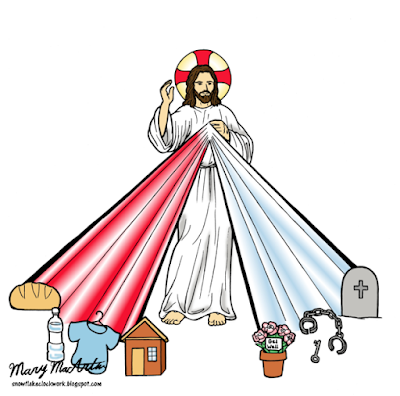 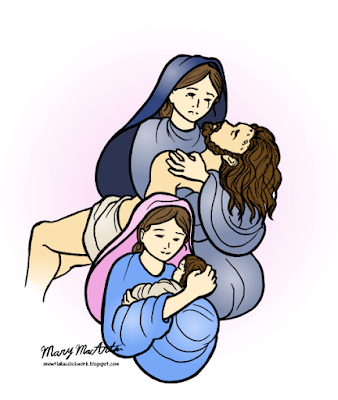 Some illustrations I was recently hired to do for Vacation Bible School lessons. With the top one, I had to think up symbols for the Corporal Works of Mercy (of which "Care for the earth" is NOT one). What do you think of my choices?
Posted by Mary MacArthur at 4:26 PM No comments: 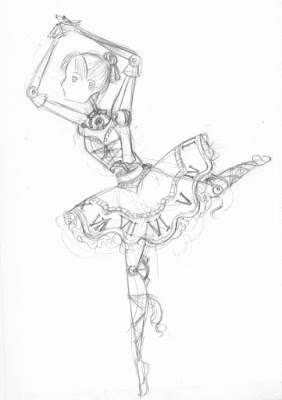 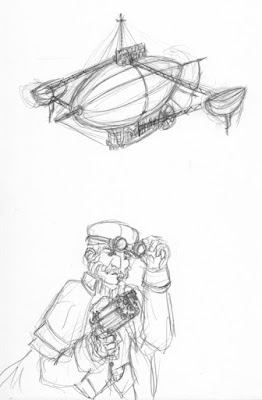