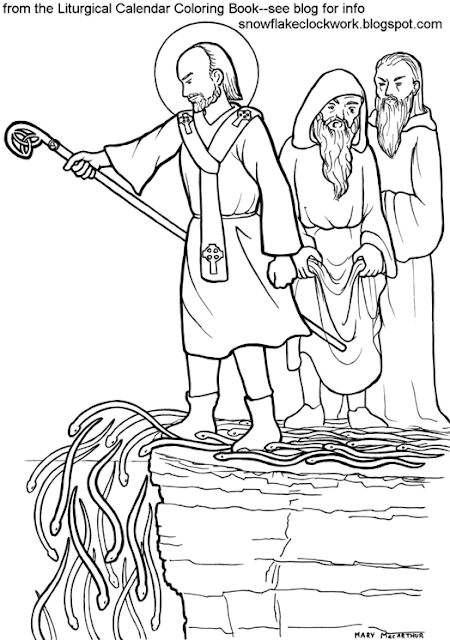 It was fun to draw those snakes pouring over the edge, and angry Druids! You gotta hand it to those Druids, though. They may have had unfriendly miracle contests with the Christians, but they didn't murder them.

Anyway, tomorrow I'll be sending out the coloring pages for March, so sign up now to get them and a whole year's worth of coloring pages for every single solemnity, feast, and memorial! (If you sign up after I've sent the March ones, you'll get them next March, or if you specially ask I can probably send them to you.)

The March pages include:

I almost forgot to mention, I also designed the logo for Nativity Press, the publisher for Clare's Costly Cookie. I enjoyed doing something with such a Eucharistic emphasis.
Posted by Mary MacArthur at 10:31 AM No comments:

The Chair of St. Peter 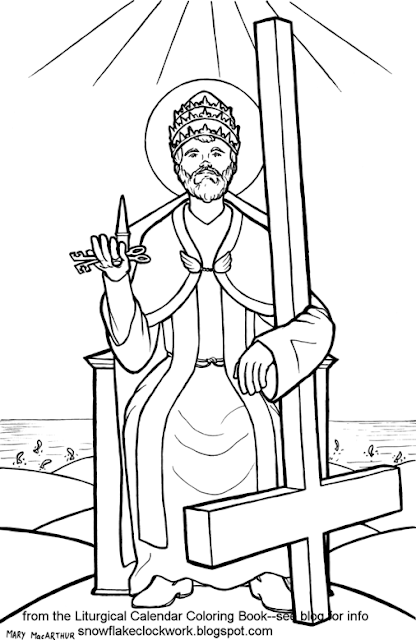 Today is the feast of the Chair of St. Peter, which is the title feast of the Personal Anglican Ordinariate in the United States! Hurrah!

So this is the coloring page I did for it. Sign up to get pages for the entire Liturgical Calendar here.
Posted by Mary MacArthur at 11:08 AM No comments:

DC fanart for yesterday and today 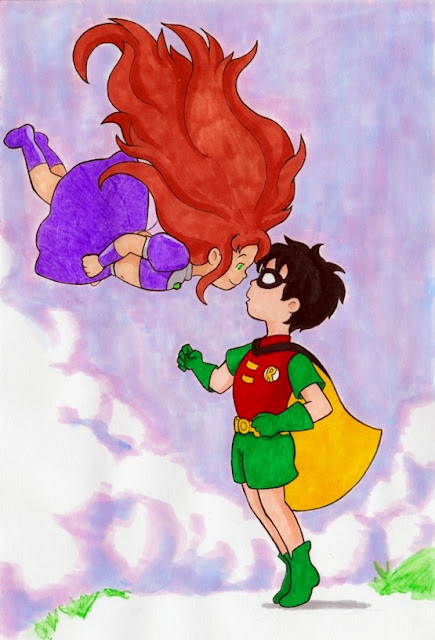 For St. Valentine's Day, Starfire and Robin in the iconic pose from Ponyo. 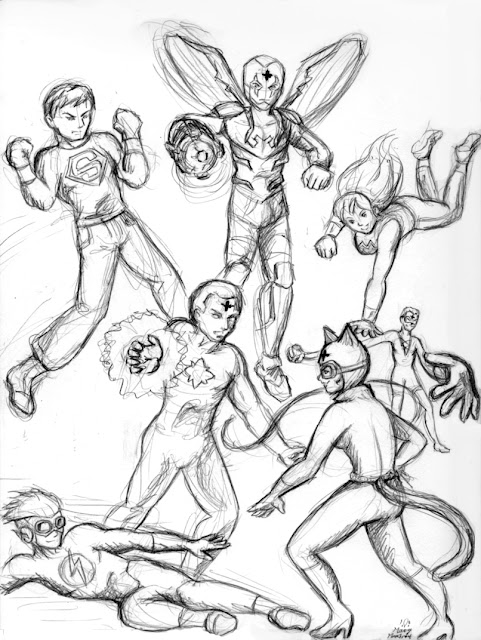 And for Ash Wednesday, a Young Justice action scene with those characters who are Catholic according to the Comic Book Characters Religion database having ash on their foreheads. ^_^
Posted by Mary MacArthur at 11:01 AM No comments:

Logo I made for the Sacred Heart Institute, a clergy formation institute in New York.

Have a penitential Ash Wednesday.
Posted by Mary MacArthur at 10:46 AM No comments: 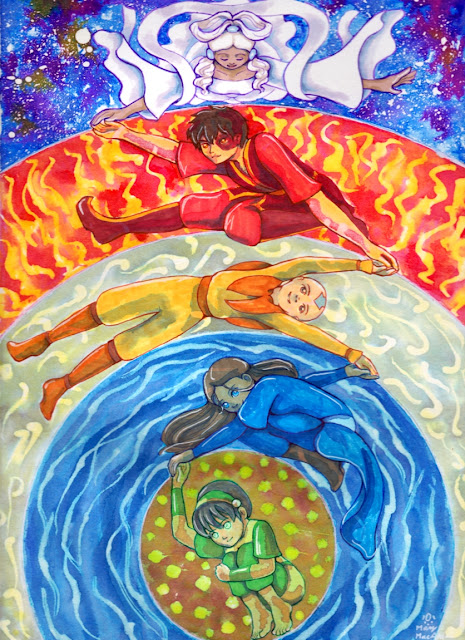 Avatar fanart based on the medieval idea of spheres of the different elements surrounding the earth.
Posted by Mary MacArthur at 11:18 AM No comments: 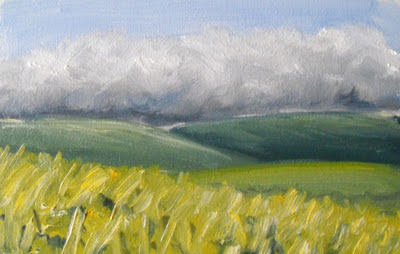 A little doodle to get back into oil again and sort of a color study for a commission-- not the same composition or scene as that commission, just the same colors.
Posted by Mary MacArthur at 4:49 PM No comments:

Today I started something I should have done years ago: re-wallpapering my room. It's had this over-simplified without being interestingly stylized scattered flower-thing for years, and I always hated it:


So, I just bought two rolls worth of something new, still floral, but far more elegant. (It was a lot of trouble to get it; Home Depot doesn't carry wallpaper; Lowe's has hardly any in the store and when I tried using the Lowe's website I find this nice stuff but then it's out of stock, which they don't tell me until I've already put it in my cart and done the first two steps of checkout, which by the way take forever to load. Bleh. I finally got it from a site called Steve's Blinds and Wallpaper, where it was also much cheaper than Lowe's had it.)

I'm putting it up bit by bit as there's time and opportunity to move stuff out the way. 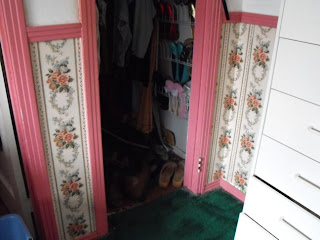 A vast improvement I think, and hanging it is kinda fun. The overall scheme is a bit too nursery-princess now, however, so we plan on repainting the moldings eventually, probably brown or green. Never liked that shade of pink, either.
Posted by Mary MacArthur at 3:33 PM No comments:

A look at the book! 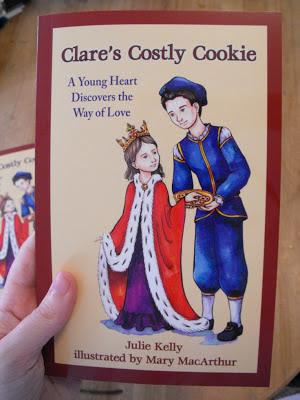 My copies of Clare's Costly Cookie arrived today! It's so amazing to hold it in my hands; it's so real! Here's a peek inside. 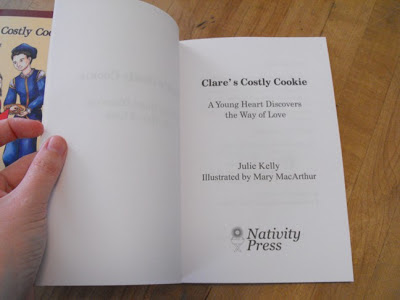 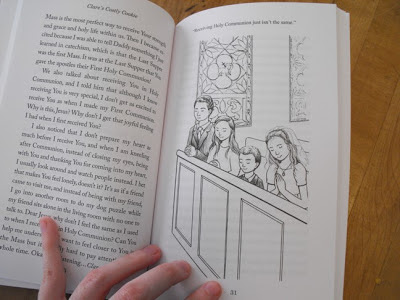 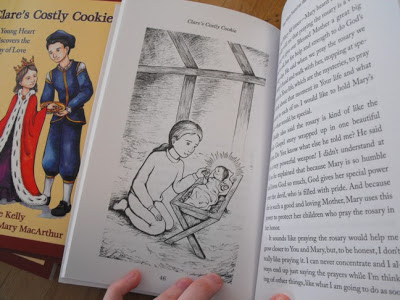 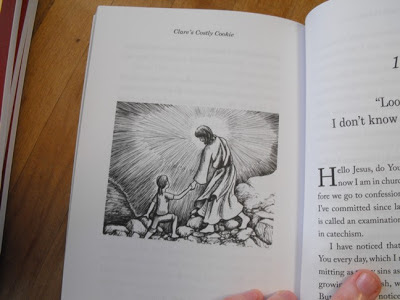 I'm so excited! Trying to spread the word; if you have a blog or something and would like to do a review, let me know or contact Nativity Press.
Posted by Mary MacArthur at 2:40 PM No comments: 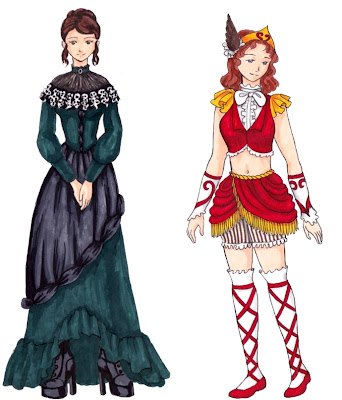 Some more character designs for my Batman fancomic: Victorian ladies.
Posted by Mary MacArthur at 11:17 PM No comments: 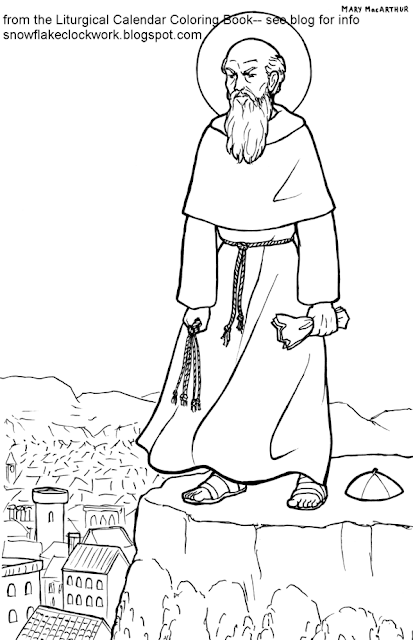 Saint Peter Damian is a saint for our times.

One thing I'm trying to do with this coloring book is show saints in a variety of emotional states. While it is true that Joy is the ultimate reality of holiness, I'm portraying moments from their earthly lives, and in this life we go through other states, however holy we might be. Being holy does not equal feeling good all the time.

So Saint Peter Damian is angry. Because--and you probably don't want to tell this to your children who will be coloring this page--he confronted terrible corruption in the Church, including sexual abuse of young boys by clergy. This outrage is, unfortunately, not confined to recent times, but was around in the eleventh century too. Peter Damian wrote a long letter, a book really, to the Pope exposing and condemning the abuse and strongly exhorting him to do more about it.

So while this story may not be for the Coloring Book's audience, I do symbolize it in the picture. The letter was called the Book of Gomorrah, and the cliff on which Peter Damian stands has salt deposits, like the cliffs around the Dead Sea, thought to have been the site of Sodom and Gomorrah. But the city below is a medieval Italian one, the world Peter fought to reform.

Sign up for the Liturgical Calendar Coloring Book here.
Posted by Mary MacArthur at 11:36 AM No comments: 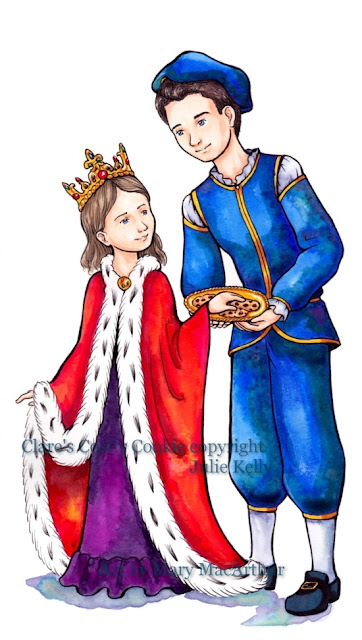 I am thrilled to announce the publication of the first book illustrated by me: Clare's Costly Cookie by Julie Kelly!

It's a story about a nine-year-old girl who loves cookies and finds her siblings annoying sometimes, so she talks to Jesus. The dialogue narrative becomes an introduction to Christian meditation for children. I did several illustrations both of the girl and her family and what she contemplates, so it's both cute fun and some deeper theological symbolism.

Check it out here and let me know if you get and like it!
Posted by Mary MacArthur at 12:05 PM No comments:

Girl with a hat sketch 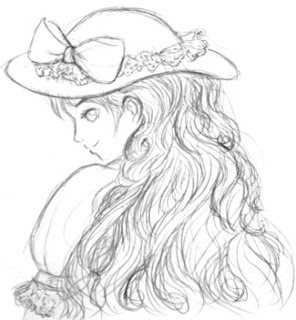 Posted by Mary MacArthur at 12:25 PM No comments: 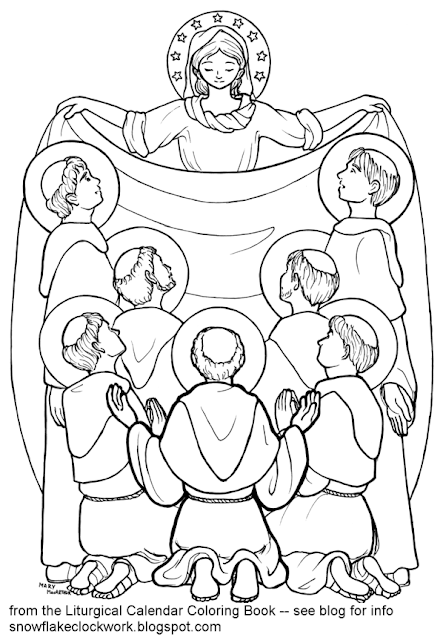 I just sent out all the coloring pages for February! The feasts included were:

You too can get a coloring page for every single Saint's day in the calendar, just sign up here.

This composition was tough to figure out, because, well, there're seven of them! I'm pretty proud of how it turned out. Golly, I haven't posted anything but coloring pages here for a while. Most of my free time lately I spend writing, revising the script for my Batman fancomic, so I haven't drawn much else.
Posted by Mary MacArthur at 2:35 PM 1 comment: