As you can see over to the side, there's a new poll for this week, about e-books. Do be so kind as to answer!

I myself have only a few e-books on my computer and no e-reader; I vastly prefer real paper. But I can see the advantages... as well as disadvantages, of each.

I am starting off with these sorts of questions because the world of indie published fiction is booming! And after conceiving all my stories as comics for a long time, I have thought of some novels...  I've looked into it a lot and while I always dreamed of getting published in the normal manner, indie is vastly more appealing now. Much work to do!
Posted by Mary MacArthur at 1:00 PM 5 comments: 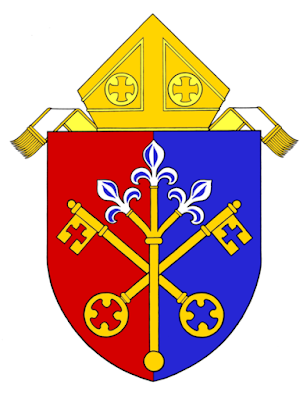 On Candlemas this year, the first Bishop for the Ordinariate of the Chair of St. Peter will be ordained in Houston, Texas. My old parish and the principal church of the Ordinariate, Our Lady of Walsingham Catholic Church, (will it become a cathedral?! ) is having a festival on that day, and as a part of that, there will be an art show, and as part of that, will be me. 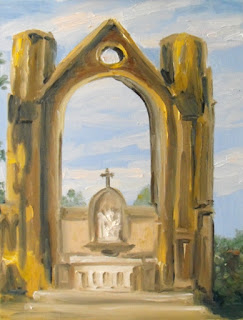 Well, some of my work, and also some of my sister Anna's work. There will be a binder of the entire Liturgical Calendar Coloring Book, the above painting; and some never-before-seen colored versions of LCCB pages, colored by Anna and me, and even some of the original concepts, sketches, and draftings for the Ordinariate coat of arms.

We will be there in person, too, which is exciting, not just for the art show bit, but the occasion and getting to visit the place again. I don't yet know if I'll be allowed to sell anything, but if I am, there will be coloring books on CD, limited edition prints, and holy cards.

And then will be the ordination, at the Sacred Heart Co-Cathedral, which will be an historic event, and I think Cardinal Müller will be there, who was one of the few to stand up against the Kasperite heresy at the recent synod, for which the Pope may have threatened to take away his cardinalate, so that's pretty awesome.
Posted by Mary MacArthur at 1:29 PM No comments:

I like internet polls, so I added one here! See over in the sidebar.

The first one's about book genres. I will aim for posting new polls on Mondays, though that's not a promise. I'll be interested to see the results.
Posted by Mary MacArthur at 10:50 AM No comments: 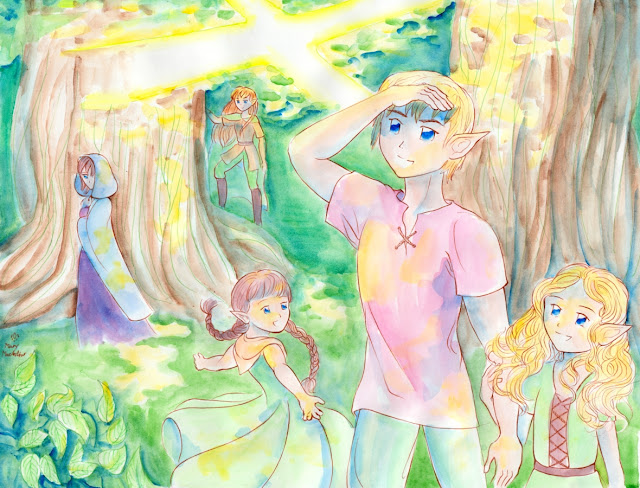 My late Christmas present for my friend Casey, a sunny watercolor of the elf siblings from her story Athol.
Posted by Mary MacArthur at 4:02 PM No comments: 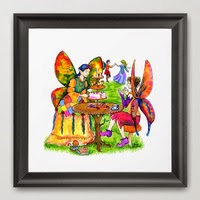 Society6, which hosts my print shop, is having a promotion. Until midnight (Pacific time) on the tenth, you can get free shipping if you enter my shop through the following link:

Putting more art in that shop is one of the things I should do to be more prolific in this year!
Posted by Mary MacArthur at 2:05 PM No comments:

The year behind and before 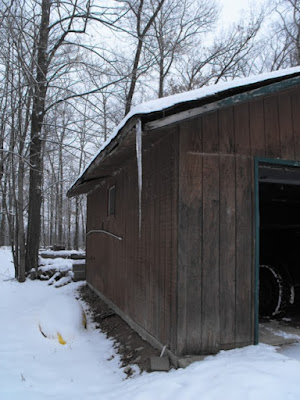 I usually don't pay much attention to the turn of the year, but this time, I feel the potential of the coming year with excitement and am eager to do much with it. I think it may be because I used to mark off each year by its summer, with the trip to Minnesota being the standout thing, but now I live here.

So, as a few entries ago I looked over the art of the last year, I will overlook what happened and what I got done, to the end of going forward into the new. At the beginning of last year, I was playing a video game that I'd been anticipating for years, Professor Layton vs. Phoenix Wright, Ace Attorney. It was amazing and solidified these series, now as one story, as definitely my favorite games ever. I did some fanart and there's more yet to do, and I have much to say as well in defense of the worth and beauty of video games as stories, which many conservative Christian folks don't seem to believe in. 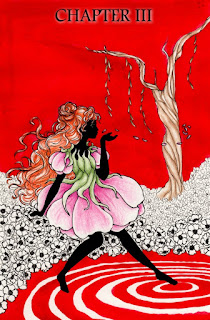 I finished the second and third chapters of my first major comics work, my fancomic Batman: Decadence. Working on it is always a mad rush that is very nervewracking and good for my drawing skills.

I experienced my first Easter at a typical Novus Ordo church, and overall, it was not a pleasant experience. I mean, I know the Mass is the Mass if done validly, which I believe it is at said church, and indeed has infinite merits and we receive the true Lord in the Eucharist Which is infinitely precious, worth every pain imaginable, worth dying a billion times to obtain.
But... why oh why surround Him with Ugly? Why sing wannabe showtunes with heretical lyrics? Why--Please, No, Stop--Why tromp up and take Him in your hands and then chew Him loudly when you've been chewing gum all through Mass and never genuflected once???
I think I know why.
Not all the people who do thus, but the people who worked so hard so that this would be the norm, never believed in Christ at all. Which makes the numbers of Catholics in adulterous unions and using contraceptives and approving of sodomy start to make sense. On that note, 2015 was the year I stopped insisting to myself that Pope Francis just had to be a good pope, and realized more than ever before how bad things have gotten in our civilization, and resolved to speak out more about it.

I started writing a column for the newspaper at which I work. What I wrote was not unrelated to how bad things have gotten in our civilization, as I dealt with the supreme court decision on sodomite "marriage", Planned Parenthood selling parts of slaughtered babies, and the ascendency of socialism, as well as more pleasant topics like how much I like fiction, old stores in the nearby town, high school football, and Christmas. 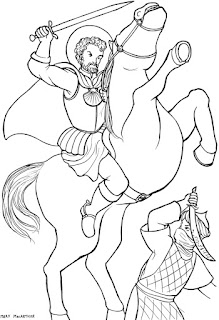 I assembled some of the pages of the Liturgical Calendar Coloring Book into themed collections: Apparitions and Titles of Mary and Saints who fought the forces of Islam. In regards illustration work, the year was bit patchy, as, due to balancing the day job and household work, I sometimes took longer than forecast to deliver and clients were very patient, for which I am grateful.

Overall, it seems that 2015 was the year of me settling into having a day job and being one of only two people to manage a house, without parents around. I hope to make 2016 the year of fitting all the other things I want to do into this framework. ^_^
Posted by Mary MacArthur at 7:18 PM No comments:

Labels: photography, progress review, ramblings, things that happen to me

More about the holiday 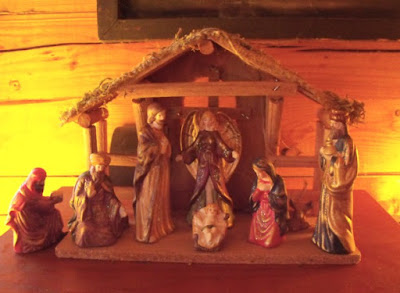 Just a couple photos from Christmas; my sister and I were on our own for it for the first time. I think we did fine. 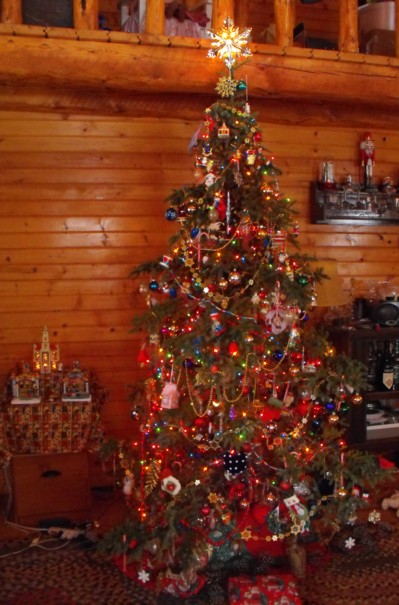 We usually take down the tree and decorations the day after Epiphany, but I had work all day, so... And some folks leave them up till the Baptism of the Lord, you know! Just as long as we get 'em down by the time of the Sundays that end in gesima.

And an in-progress shot of my Turnabout Seafarer piece, showing how I started with nice sloppy ink wash to establish the values. 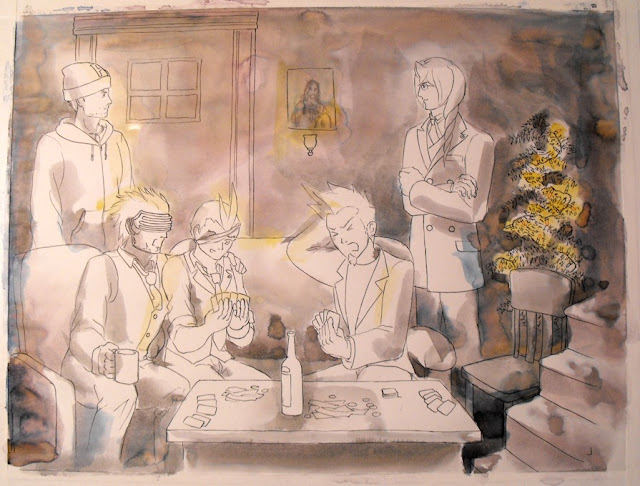 Posted by Mary MacArthur at 12:08 AM No comments: 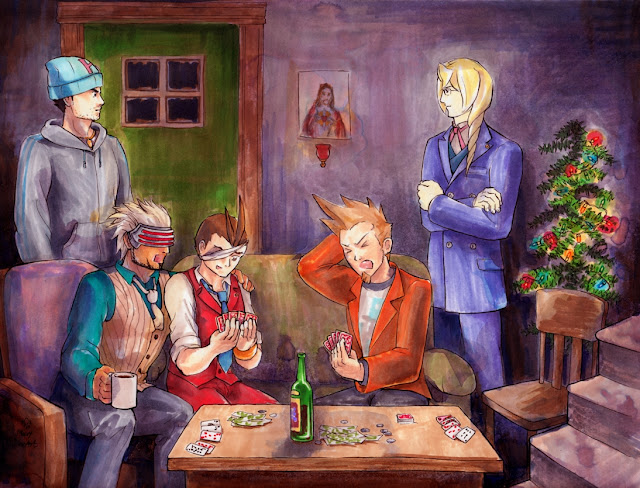 This is the picture a sketch detail of which was featured in the last post: a casting of my favorite play ever, The Seafarer by Conor McPherson, with characters from Ace Attorney, particularly in the context of the game Apollo Justice, Ace Attorney. The two works have many powerful themes in common, with a drinking-too-much, downtrodden yet resilient man playing poker for the highest of stakes, and a friend's power of sight which defeats the devil in the end.

It's a gloriously Catholic Christmas play, and I've seen it twice now, and this last time I actually got to see it at Christmastime, which was great. Happy Epiphany; I hope to post again today about the holiday!
Posted by Mary MacArthur at 2:19 PM No comments: 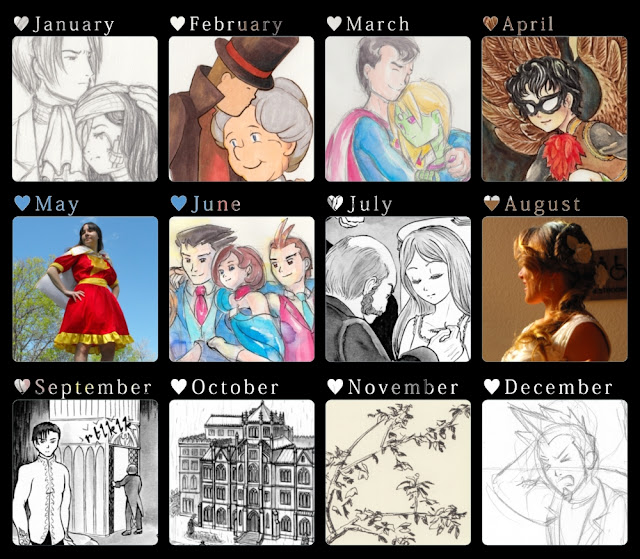 For the past couple years at the end of the year, I've filled the above template with details of a piece of art I did in each month, and it makes a nice overview of the year. In 2015, I didn't have time to draw much. The latter months have mostly panels from my fancomic, Batman: Decadence, which was all I had time for at the time. There's also, for August, a wedding photograph, which I got to do in professional capacity, of my sister-in-law. And December's got a sketch from what was then a work-in-progress, the finished which I will post presently!

For this new year, I want to draw much, much more. I have observed how very quickly my drawing ability grows when I am drawing a lot and even more quickly lessens when I'm not. More art, and doing more with it: more coloring pages to form into sets and books, more paintings to offer for sale, more fancomics to post and regular comics to try to publish, more fanart for the love of stories and for fun. To this end, I have already started to make an effort to manage my time and sleep habits better. May I prevail, and may you also toward worthy goals in this new year!
Posted by Mary MacArthur at 2:40 PM No comments: