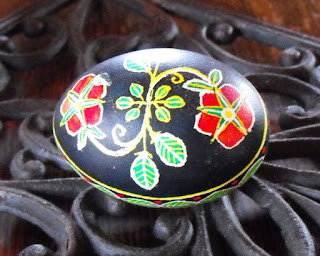 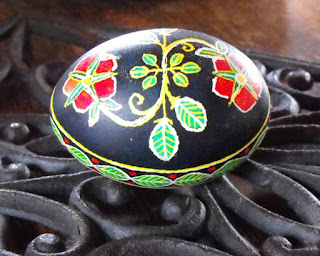 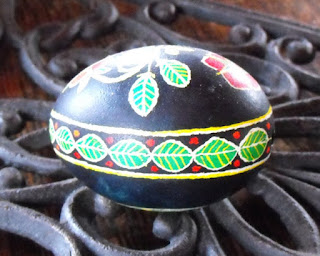 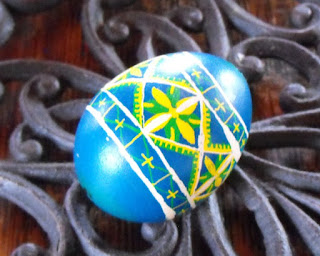 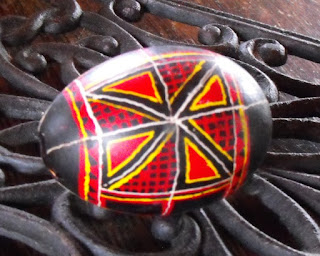 These are the pysanky I made the last two years. Planning to make at least one more this Easter season.

My birthday was a couple days ago. Revived an old tradition: 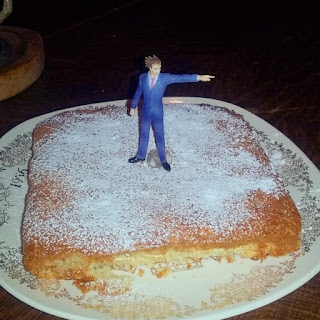 A figurine I received as a birthday present as a topper!
Posted by Mary MacArthur at 1:30 PM No comments:

Labels: baking, photography, pysanky, things that happen to me

Sir, where have you taken Him? 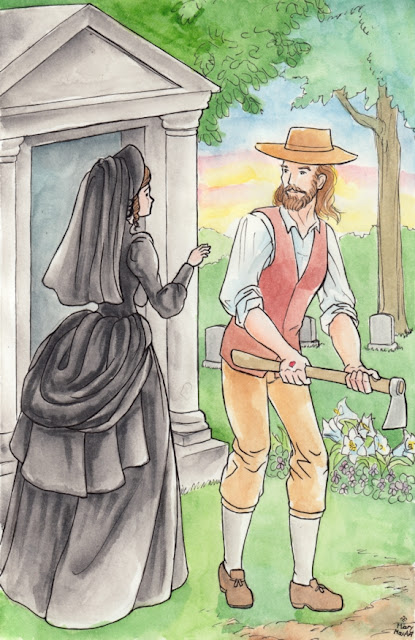 Fourth and final personal piece for Passiontide and Easter. (Though there is one more I'd like to do for the Easter season...)

She, thinking that it was the gardener, saith to him: Sir, if thou hast taken him hence, tell me where thou hast laid him, and I will take him away. - John 20:15

I really like Noli Me Tangere paintings where Christ is in a full-out gardener disguise. Here's a nice article about that. (But look out, the modern pieces included are hideous.) And I wanted to do it in a sort of nineteenth-century milieu, inspired by antique greeting cards.

This wraps up my set of Paschal pictures by returning to Our Lord with Mary Magdalene, a model of repentance for us all. There can be no mercy without sorrow for and cessation of sin. Our sins crucified Christ. He rose so we could be forgiven. Let us cast them off and live anew in Him.

Happy Easter!
Posted by Mary MacArthur at 10:06 PM No comments:

Third out of my four personal pieces for Passiontide and Easter.

Major spoilers follow for Layton's Mystery Journey: Katrielle's Mystery-Solving File, along with implied ones for Dual Destinies and Azran Legacy. 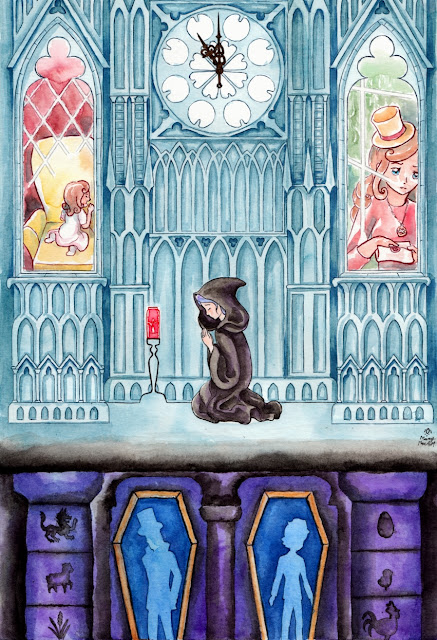 In Layton's Mystery Journey: Katrielle's Mystery-Solving File, it's so awesome to see the Professor and Luke adventuring together again, but so shocking and sad what happens to them.

And it wasn't till I had thought about it for a while, not in fact until I realized that I have planned a similar thing for the precise sake of such a symbolic image, that it hit me. I plan in one of my stories for there to be king under a sleeping spell in a chapel, and one of his men remaining by his side in vigil, and I meant it as an image of visiting the Blessed Sacrament in the tabernacle. They went further and actually had them locked in boxes! If you still don't get it, know that there are a multitude of old prayers and holy cards that depict Christ in the Blessed Sacrament chained and caged as Prisoner of Love.

As always, I know that this was likely not intentional, but that doesn't matter at all. Depicting Truth, Beauty, and Goodness, and most of all especially in this case Love, will make your art reflect Christ.

I've written about the Eucharistic imagery of the other half of this story, that is Ace Attorney. Phoenix and Apollo are the Christ figures there: Phoenix is associated with bread and wine when he can't show forth his own attributes; Apollo uses his body to save his beloved in such a way that reflects the practice of purposing to console Christ in one's reception of Communion. So on the Professor Layton half, while the Professor and Luke, especially in the climax of Azran Legacy, have the sacrificial part of Christ-figuring down, there wasn't a particularly Eucharistic aspect. Until now.

Like Jesus the Prisoner of Love, they let themselves be enclosed in a casket in a church, silent and mostly alone, for the sake of a beloved: Luke's wife, Marina, which is perfect, as marriage is an image of Christ's relation to the human soul. This is the best thing about stories. They can yield not only intellectual but emotional understanding of the truth of God. If it doesn't mean much to hear that God loves you, engage with a story that contains an immense, moving example of sacrificial love, like Hershel Layton's love for Katrielle, Claire, Luke, etc., and it will give you a hint, a glimpse of a smidgen of what that Love is like.

In 2013, Pope Benedict XVI stated he was resigning the ministry (not the office, as canon law requires) of the papacy, and Jorge Bergoglio was elected to succeed him in a conclave that has been revealed to have been heavily influenced by a cooperating group, also against canon law. Benedict retains his papal name and vestments and still gives papal blessings. But most obvious of all indications that something is gravely wrong, putative pope Francis has endeavored to make the heretical precepts of: God willing all religions, states having no right to execute criminals, and worst of all and most relevant of all, unrepentant mortal sinners being encouraged to receive Communion; part of universal Catholic practice. Only one out of all the bishops is saying that something must be done about the entire mess: Henri Gracida, retired bishop of Corpus Christi.

I wrote about the events of 2013 back at the time, and like now, I was using fiction to help me make sense of it. I know now I was wrong about many things. I wasn't one of those folks who had a bad feeling as soon as they saw Bergoglio, but that makes me all the more sure of his ill effect now. I had to be convinced he was a bad pope or even an antipope, and I certainly was convinced. But I can still use what I thought then and learn from it. And I still think fiction resonates around the spiritual realities. Thus:

Once, I would have been upset by the inclusion of an evil bishop in Professor Layton. Even though that one would've been Anglican, not Catholic, I would have seen it as an anti-Christian message and been distressed. But now I know better. Look at McCarrick, Cupich, Marx, Zanchetta, Gregory, Fernandez, Tobin, Kasper, Dolan, Paglia, Coccopalmerio, Wuerl. Almost all the bishops are doing evil. So many are sexual perverts, Modernists, or, often, both. It isn't "a few bad priests." It is an organized, intentional infiltration. They are persecuting good priests -- Kalchik, Dwyer, Rynne, and my own pastor, who even once said I was like a daughter to him, has been taken away and treated cruelly; heck yes I relate to Katrielle -- and they are holding Christ captive in a further sense.

Donatism isn't true. Even when clergy are evil, they still hold the power to confect the sacraments. That's a good thing, because otherwise most people couldn't get valid sacraments, but it means wicked clergy are hurting Christ through the sacrilege of confecting the Eucharist while in mortal sin. Many of them don't care because they don't actually believe in Him, but some do and do care because hurting Him and encouraging others to hurt Him is exactly what they want. They subject Him to irreverence and abuse through refusing to genuflect to Him, adulterating the liturgy, encouraging sacrilegious Eucharistic reception, abusing the faithful in every possible sense, even such horrors as in the Pennsylvania report: directly desecrating the Blessed Sacrament along with their victims in acts of Satanic ritual sexual abuse.

And He endures this, as a continuation of His Passion, for our sake! He will act, He will judge, but first He gives us the chance to, spurred on by love and longing, solve the puzzle of what's going on, stand up for Him, and help ultimately to rid the Church of these evil bishops and deliver them to justice.

Protestants tell us to leave, that all you need is the Word of God in scripture, not the Bread of Life that is the Word made Flesh. Just as a Kasperite priest might have told Marina to leave and to remarry, that nothing more could be expected in her harsh circumstances. But a true bride does not leave her bridegroom, even when he is imprisoned and she is a hostage. The Catholic Church is the Bride of Christ. 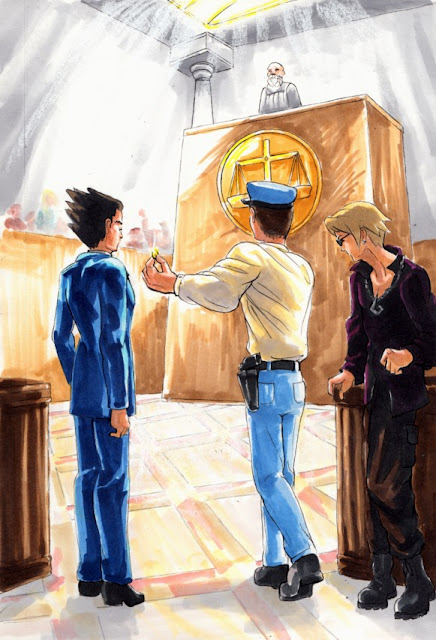 Second of my four pictures for Passiontide and Easter.

In Ace Attorney, dates are given for everything that happens, but for only one event, the death of Gregory Edgeworth, is the year given. Still, that allows the whole timeline to be plotted out. In 2019, this year, occurs the trial of Zak Gramarye for the murder of Magnifi Gramarye, which results in the disbarment of Phoenix Wright and the beginning of the Dark Age of the Law, and it happens on April 19, Good Friday, that is today.

I was stunned when I discovered this. Of all the things in Ace Attorney possibly to happen on Good Friday, this may be the most symbolically appropriate. With only the one year specified and Good Friday always being a different date, there's no way they did it on purpose, surely! ...I tend to believe that stories have guardian angels.

This is like my twelve Christmas pictures portraying the Christmas events in Ace Attorney with added symbolic emphasis. I based the poses and lighting on Ecce Homo by Antonio Ciseri.

As always, this is not intended to be in any way irreverent. Heroes, if they exemplify true goodness, will be images of Christ.
Posted by Mary MacArthur at 5:37 PM 1 comment: 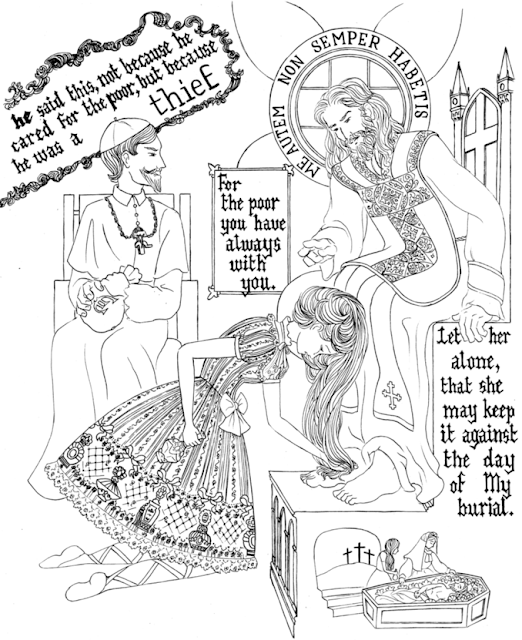 I made a bit of a mistake; as it turns out, it's the Gospel for today, not last Thursday, that is this scene. So here's the ink outline of my Mary Magdalene's Perfume Bottle piece, and you can use it as a coloring page if you like.
Posted by Mary MacArthur at 8:38 PM No comments: 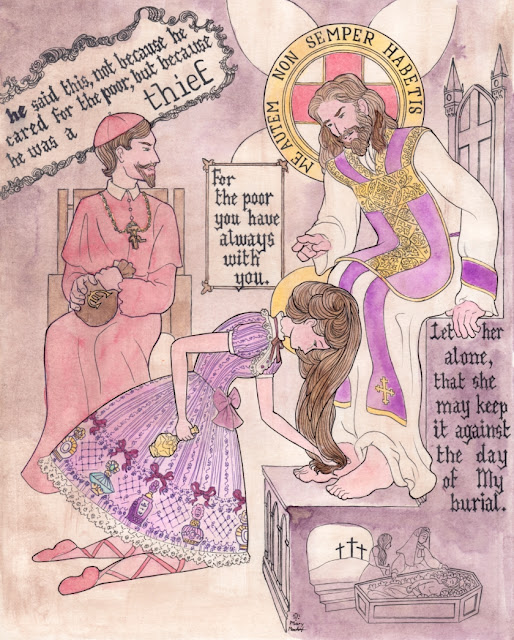 "No one can be at the same time a good Catholic and a true Socialist.” - Pope Pius XI
Posted by Mary MacArthur at 2:06 PM 4 comments: 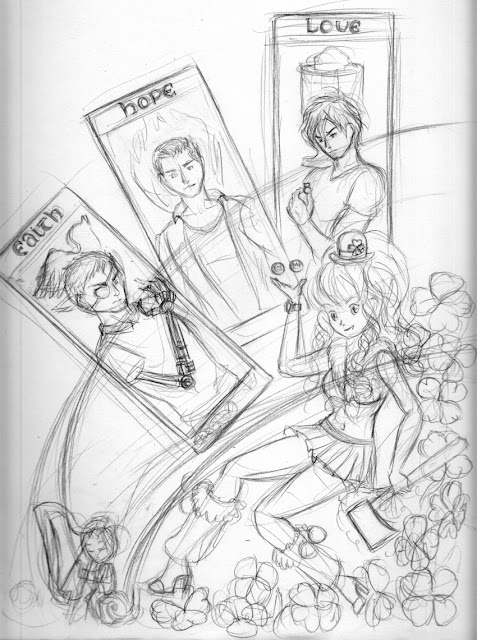 The sketch for the Zero Escape fanart piece I did for St. Patrick's Day.
Posted by Mary MacArthur at 9:24 AM No comments:

Writer Elizabeth Fust has shared some of the sketches I've done for her children's book project: 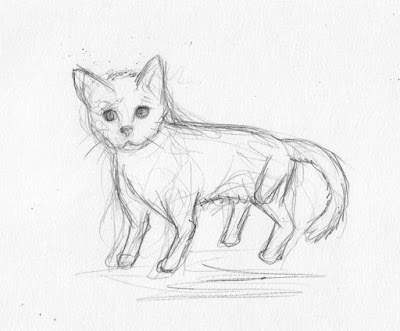 Posted by Mary MacArthur at 10:29 AM No comments:

Read more »
Posted by Mary MacArthur at 2:55 PM No comments: