My last column for the Aitkin Independent Age attracted some notice, about which I was very pleased and excited.


Mary MacArthur’s Sept. 3, 2016 column [Note: this was the date it was posted online; it was in the Aug. 31 Age print edition.] misrepresents Planned Parenthood and misleads Aitkin Independent Age readers. Planned Parenthood Minnesota, North Dakota, South Dakota is the leading provider of high-quality reproductive health care in our region. One in five women in America has sought care from a Planned Parenthood health clinic. Women trust us, because our rigorous health standards have been developed with the nation’s top medical experts over our 100-year history nationally and our 88 years of providing care in Minnesota.

It's a letter to the editor from the vice president of clinical operations of Planned Parenthood of Minnesota and the Dakotas. I wasn't being sarcastic when I said I was pleased. These people commit/enable the killing of children; I'm proud to be their enemy. Await my next!
Posted by Mary MacArthur at 4:23 PM 1 comment:

I should have posted this on Sept. 11th, but I didn't get the time. An in-process photo of my Our Lady of Victory, Star of the Sea of Stars painting. 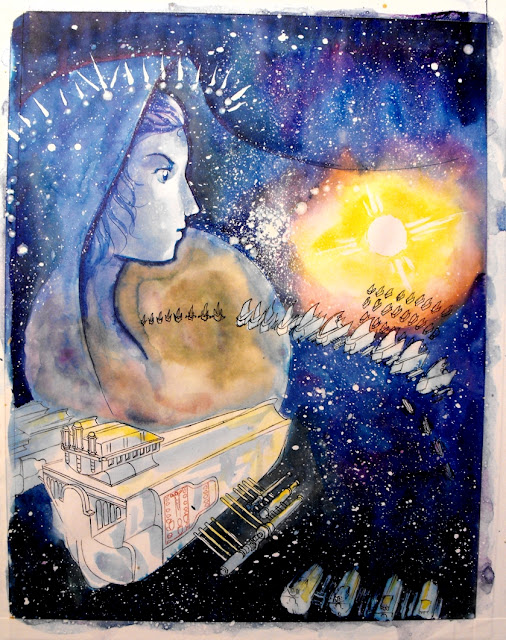 It was before I did the marker coloring on the spaceships; I think it looks pretty cool this way too. Also, being a digital photo rather than a scan, it gives a different view of the colors, which any digital representation of a traditional piece can never capture fully.

I also wanted to put the following quote with it, which I found in this article.


Catholic sources often do not mention a crucial fact, which is present in some Muslim sources. The latter say – and up to this point all Catholic sources agree – that there was a certain time when the situation of Catholics seemed desperate. There had been a terrible clash between the two armies on board ships, and in this stage of the battle, Catholics were in retreat and the situation seemed completely lost. But suddenly, when least expected, the Muslims began to back away, and when some of them were asked what was happening, they replied that a lady dressed as a queen had appeared in the sky, gazing at them with such a scary look that they lost all their courage and started to run away.

May it be so again! Our Lady of Victory, pray for us!
Posted by Mary MacArthur at 12:01 AM No comments:

I fear I might develop a reputation for contrariness among the readers of the Aitkin Independent Age, for more of my columns have been in argumentative response to other columnists than any other writer during the time I've been working there. But when they argue for killing people, I have a moral obligation not to let it go unanswered.

Having been in the pro-life movement since childhood, I’ve heard the arguments for abortion hundreds of times, but they still make me furious. The arguments Pam King makes in her Aug. 17, 2016 column are old, tired ones I’ve seen over and over but the duty to defend innocent life still calls me to rebut them.


Ms. King retells the “back alley abortions” scare story that if abortion were illegal, women would do it with wire hangers and kill themselves. For one thing, in Minnesota, abortion facilities could very well be using wire hangers; there’s nothing to stop them doing so. They are not required to be licensed nor inspected. Restaurants get inspected. Tattoo parlors are rigorously regulated for the health of customers. But for abortion facilities, where they perform surgery, there are no health inspection requirements whatsoever.


Hundreds of mothers have died from complications from completely legal abortion procedures. Lakisha Wilson, Tonya Reaves and Jennifer Morbelli are just some of the names of women who died in recent years. Reaves bled to death, an ambulance not called for five hours, in a facility run by Planned Parenthood, supposedly the most respectable abortion provider, which receives billions in government funding. But even in the cleanest and most professional facilities, someone dies in every single abortion procedure. That’s the point of the procedure.


Read the rest here.
Posted by Mary MacArthur at 8:00 AM 2 comments:

Our Lady of Victory, Star of the Sea of Stars

The latest issue of Ink and Fairydust is out, and it's a very exciting one: Space and Sci-Fi is the theme! And for the cover, I had one of the most awesome ideas I've ever had: 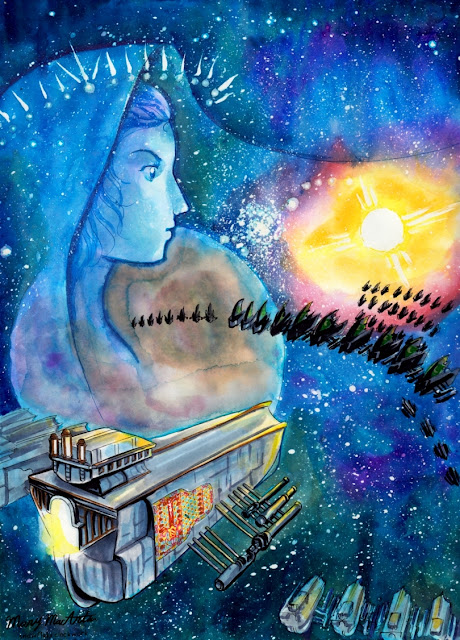 The Battle of Lepanto in Space!

Go check out the issue here!
Posted by Mary MacArthur at 12:49 AM 1 comment: