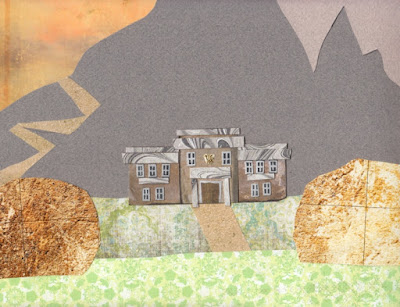 Veronika Bosch, who's never left her father's estate, has to go on a journey when envious animals kick her out. Half collage, half puppetry, it's the traditional media equivalent of an elaborate sprite comic.
Posted by Mary MacArthur at 1:30 PM No comments:

Nib it in the bud 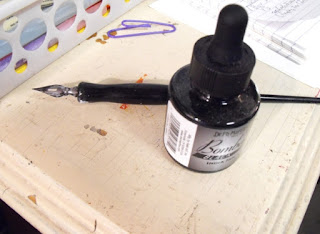 It's another art medium breakthrough for me and I'm a dummy for not doing this sooner. The other day I started messing around with a steel-nib dip ink pen, which I hadn't used since college drawing class. I've been using Pigma Sakura Micron felt tip pens for decades. Well, in smoothness and versatility and ease of making a beautiful line, the steel nib blows the felt tip out of the water.

This is especially fortuitous as I'm working on The Vampire's Saint by Corinna Turner, my first comic solely in black and white. With it, I really want to expand my capabilities with black and white, and I was frustrated at the roughness of my lines so far, so this will be perfect.

And I have this book to help me out: 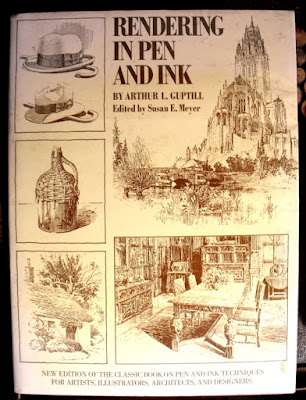 Rendering in Pen and Ink by Arthur L. Guptill, published 1976. It's great! Check out these examples: 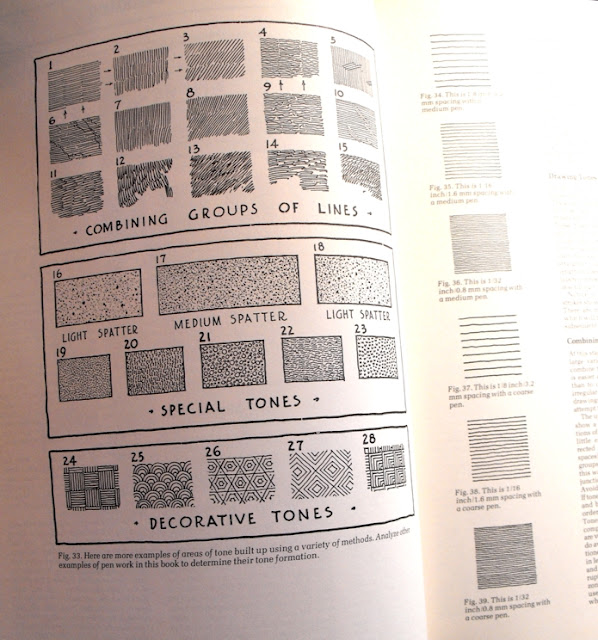 I have a lot to learn. I will still need the felt tips for initial outlining on pictures to be colored with alcohol-soluble marker, because such markers cause India ink to smudge. But for purely black and white pieces, this is going to be the way to go.

Posted by Mary MacArthur at 7:20 PM No comments:

Paper Doll Veronika back in the ring 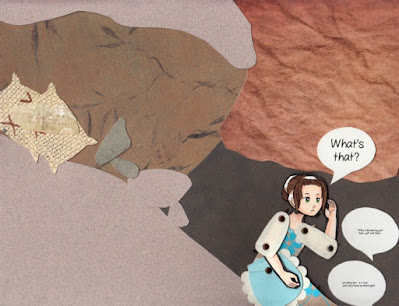 Paper Doll Veronika has updated; Chapter 2 of Part II, "Voices in the Depths", is posted!
The chapter begins here.
The story begins here.

I'm so glad the site is now back and running fine!

Veronika Bosch, who's never left her father's estate, has to go on a journey when envious animals kick her out. Half collage, half puppetry, it's the traditional media equivalent of an elaborate sprite comic.

Posted by Mary MacArthur at 3:34 PM No comments:

Paper Doll Veronika down but not out 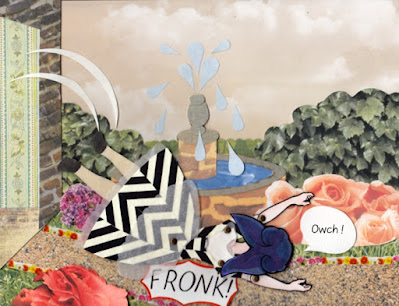 Unfortunately there will be no update for my webcomic, Paper Doll Veronika, this week, since the site is down; my web-host says they're having server problems. Hopefully this will not extend too much longer; if it does, I'll have to figure out something else, a different host perhaps? I understand little of how websites work. At least I'm not at all dependent on a "cloud" for my files.

Posted by Mary MacArthur at 10:15 AM No comments:

After ignoring it for a long time, I returned to my Society6 print shop, cleaned it up, and added some new pieces! Here are the pictures I added: 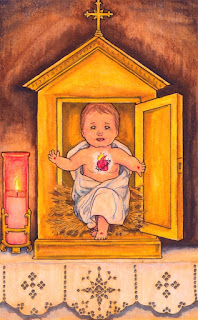 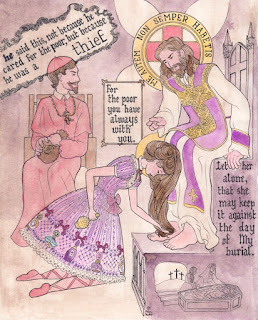 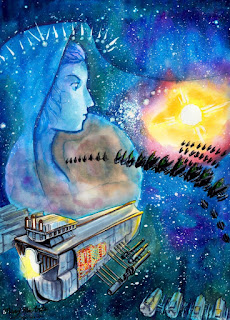 I was pleasantly surprised to see that their interface update, unlike most sites', was actually an improvement, and excited that they now have stickers available. This will work well with my plans for my shop ultimately to be full of Paper Doll Veronika goods. More about that later!

Posted by Mary MacArthur at 3:44 PM No comments: 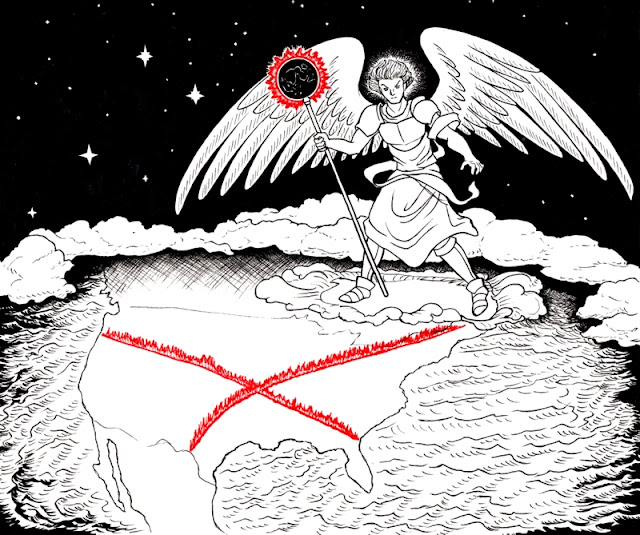 The water turned out particularly well, I think.

Posted by Mary MacArthur at 12:53 PM No comments: 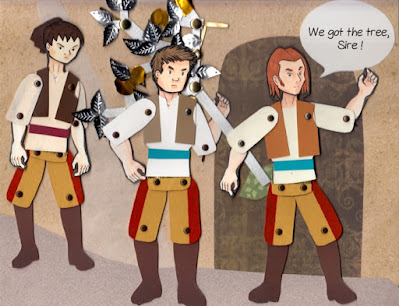 Veronika Bosch, who's never left her father's estate, has to go on a journey when envious animals kick her out. Half collage, half puppetry, it's the traditional media equivalent of an elaborate sprite comic.
Posted by Mary MacArthur at 11:39 AM No comments:

Breaking the shackles of feminist convention

I've written before about the ruining of stories by cultural Marxist ideology. This post by Laramie Hirsch a.k.a. Jack Mikkelson sums up the situation well and describes one way he and I are striving against it with the upcoming Bovodar and the Bears comic!

While the most poisonous incidences of this ruination are normalizations of homosexuality and gender aberrations in works aimed at children, the most all-pervading symptom is, I believe, an underlying feminism. Bovodar and the Bears is not feminist at all, with the main party consisting entirely of male characters going on the type of manly adventure that you don't see much anymore. Neat thing about this, is that such stories appeal to both boys and girls, while girlified stories appeal only to girls and not even all of them.

In the past, I was unaware how much feminism influenced my writing even though I thought of myself as anti-feminist. Not deliberate, it was present because I was drawing more from other works of fiction, particularly movies, rather than from observance of real life, especially when it came to writing dialogue. Thus I would make male characters act abashed and timid in regards to telling female characters what to do, because I thought that was "gentlemanly," and female characters undercut the males' contributions, simply because that's the convention. And then I'd be at a loss when I found myself disliking my characters and unable to get romantic chemistry going between them!

Two things really jarred me out of it. First was the character of Professor Layton from the eponymous video game series, a perfect gentleman, especially contrasted with the character Ernest Greeves, a perfect "beta orbiter" (though still likeable! Now that's impressive writing!) I realized that while Layton is always kind and polite to ladies, it was unthinkable that he would ever change his mind or course of action because a woman wanted him to.

The second jarring moment was when I was writing an upcoming scene in Paper Doll Veronika. The main characters have just been attacked by some violent creatures who then run off. The sole male in the group, Stade, wants to go after the creatures alone in hopes of finding something the party is searching for. At this point, I had the impulse to have Veronika say something like, "All right, we can watch out for ourselves here" just because this was conventional. But then I thought, given what just happened, why on earth would she say that? So instead, her line became, "What? Don't leave us alone!" And it just hit me, overwhelmingly, how much more natural that was, and how refreshing it would be to write without any pretense of feministic assumptions.

This post on the Arkhaven Comics blog ably describes how feminist storytelling saps a tale of dramatic power:

In a good story, there is a severe imbalance of power when the protagonist meets the antagonist. The Villain is so overwhelming that the matchup appears to be… Well, not so much unfair, as it is utterly hopeless. The Hero doesn’t win that first fight, he escapes from it. Barely surviving the encounter. The next time they meet the power balance has shifted due to the training and adventures the Hero has had in the meantime and it’s a much more even match. The third time the Hero, after having been down his road of trials, now has what takes to defeat his antagonist.

Worst of all, the Woke antagonist presents no challenge of any kind for the Woke protagonist. The challenge of defeating this unstoppable enemy, this near force of nature when the hero first him is the heart of Western fiction. If the conflict with the antagonist is trivial then so is the rest of the story.

While described in terms of action adventure, this principle applies too to works in other genres, including ones considered very feminine: take Pride and Prejudice by Jane Austen. It does not have the described Woke flaws at all. When the protagonist, Elizabeth, first encounters the villain, Mr. Wickham, she is utterly defeated by him, not in combat, but by being completely taken in by his manipulative deceptions. Throughout the story, she gains the knowledge and prudence that enables her to give Mr. Darcy the information and motivation he needs to defeat Wickham.

That also really made me think about handling this principle in Paper Doll Veronika, and helped me make a part I was having difficulty with far more exciting. I hope you will find it so when I reach that point in the comic!

Posted by Mary MacArthur at 4:15 PM No comments: