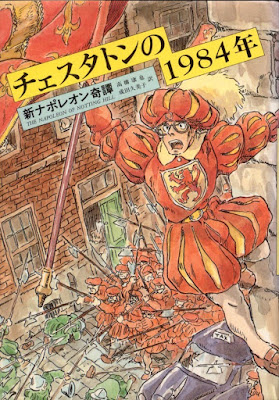 The Japanese edition of The Napoleon of Notting Hill by G.K. Chesterton had a cover illustration done by none other than Hayao Miyazaki! And here it is, at last!

I say at last because I have known this was so for a long time, from bibliographies of Miyazaki's work, and it excited me tremendously. But I could find no image on the internet and I had no way of getting it... until I met Father Peter Milward, founder of the Japan Chesterton Society (the first one there ever was) at this year's Chesterton conference. My father asked him about this book, and he said that he had been the one who edited it and he'd send us a copy. I am so very grateful!
Posted by Mary MacArthur at 9:01 PM

Labels: art not by me, Chesterton

Thank you for sharing this!

Don't suppose there's any way for a chap without your kinds of connections to get hold of a copy?

I don't know, perhaps there are Japanese book sites where one could find it... sorry not to be more help.

I will take a couple of copies PLEASE:)