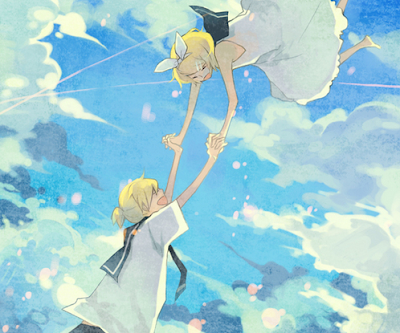 I have mentioned vocaloids here a few times, with the short explanation that they are personae of singing software programs. That definition may mystify more than elucidate, so let me explain further. A voice provider, a real live person, records all sorts of different vocal sounds. These are made into a voicebank and then through technology I don't understand, one can arrange these sounds in pitch and quality to sing any song one likes. So far, so simple. This seems at best a new kind of musical instrument and at worst a technocratic replacement of living talent. But there is something more, which makes vocaloids worthy of a more profound interest and gives them indeed a sort of life: the life of fictional characters.

Each voice is given a face, a character designed by an artist. This suggests personality enough that despite the countless people making the songs, there emerges an integral consistency. This creates a new form of storytelling, operating on several levels of subcreated reality: the characters tell stories, act as actors in stories, have "behind the scenes" stories, and play out their own stories. These levels mix and blur, (a powerful shift in one story is when, after making you think the characters were playing roles as actors, it is revealed that this is a prospective back-story for the vocaloids themselves.) making analysis both difficult and fascinating.

Most fascinating to me is how certain vocaloids express two fundamental, transcendent truths of human existence in a way no other medium could. 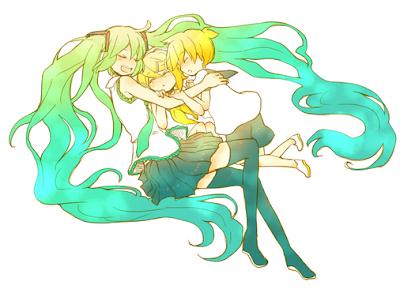 Right to left: Miku Hatsune, Rin Kagamine, Len Kagamine
Miku Hatsune and Rin and Len Kagamine are among the most popular vocaloids, with Miku being the most popular of all. While some may argue that this popularity arises from the combination of cute faces and short skirts, and sadly many songs and videos do not rise above exploitation of this aspect, on a far deeper level these characters strike a chord in the human heart because of their manifestation, expressed in the truly worthy songs and videos, of a deep reality of human existence: relationality.

As stated in Catholic theology from Bonaventure to Benedict XVI, the human person is relational by nature, in two distinct ways. 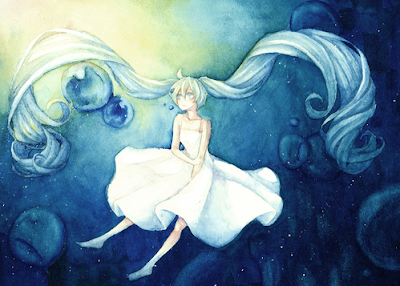 The form of relationality expressed by Miku is vertical relationality, the relation of the human individual with the transcendent, with God. Miku was one of the first female vocaloids without a male counterpart. In Christian mystical language, the human soul is female in relation to God, as the bride in the Song of Songs. Thus female characters can be figures of the soul in a particular way, and Miku is just such a Soul Figure. This is the symbolic function of many fairy tale princesses, a role that Miku often assumes.

Miku's best songs are often marked by longing and joy in a beloved, or cries of sorrow and for salvation of the self. This covers the aspects of the human soul in relation to God, as indeed expressed in the Song of Songs and especially in St. John of the Cross's reinterpretation thereof, Spiritual Canticle. It is true that love and pain are the subjects of most songs in general, and that is because this is fundamental to life. But Miku expresses this meaning more perfectly than most singers because of her simplicity and her isolation. Not a real person, her songs are her only being, her whole existence is to sing, to express this longing and joy. And while she is sometimes shown paired with other vocaloid characters such as Kaito, she has no program counterpart and more often her beloved is undefined and/or unseen. One of the most dramatic undefinitions is of a strikingly Christ-symbolic beloved, in a song for Christmas, when God "like a bridegroom" came to earth to die:

Shown variously as a fragile girl, a femme fatale*, a perfect woman, (all of these more possible because she is fictional,) expressing desire, misery, hope, Miku is a consummate figure of the soul in relation with God, vertical relationality. 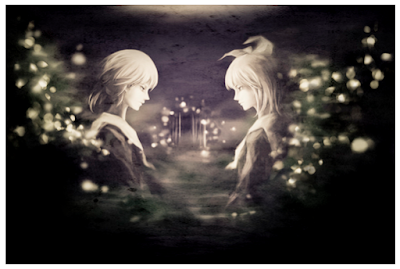 There is another form of relationality integral to human existence, horizontal relationality. This is the relation of a human person with another human person. This is expressed by Rin and Len Kagamine. As said, many female vocaloids have a male counterpart, but the Kagamines are the only pair who come in one program package. They are often seen as twins, but the company that made them left their relationship undefined so that they could have different relations in diferent songs. Thus they express fraternal, romantic, friendship, or even filial love. Some perverse videos attempt a certain two at a time, but while the best express one form of love, the fact that there is potential for others deepens their power to express human relation universally. While there are excellent solo Rin or Len songs that have nothing to do with the other and thus do not show this radical relationality, the most iconic of their stories involve both. One character is not complete without the other, and they show how human relation brings both richness and pain, through forms of love so various that some do not even exist outside fiction:

Rin and Len embody the human need to reach out, communicate and give oneself to another. This need, source of great joy and achievement, carries with it inevitable tragedy due to the finitude of both human expression and human life.

The fact that one is male and one is female makes romantic love possible and also means that they can better signify all of humanity (while Miku's femaleness means she more symbolizes man's soul), as St. Augustine says of Jesus and Mary's maleness and femaleness respectively meaning both halves of humanity participate in the Redemption. 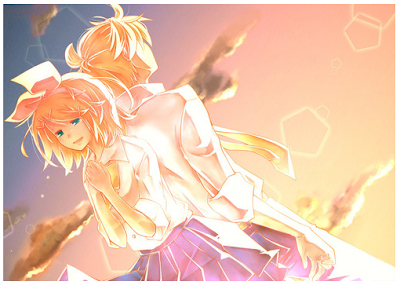 So Miku expresses vertical relationality and the Kagamines express horizontal relationality. But it is not as simple as to designate these and separate them. Relation with God and relation with fellow man are mingled in human existence, and linked also in these vocaloid expressions thereof.

As the bride's desire for her Beloved in the Song of Songs shows the relation of Christ and the soul, human loves, particularly romantic, mirror the spiritual marriage of salvation. As fairy tale princesses are often Soul Figures, the princes are often Christ Figures, and St. Paul tells husbands to "love their wives as Christ loved the Church, and gave His life for her." The male is particularly called to mirror Christ through sacrifice. (This is not to say females aren't called to sacrifice in love, but the form it takes is different--it more often mirrors Mary, the Co-Redemptrix.) The male among these characters is Len Kagamine, and in the best stories he fits this role exceptionally.

It is sometimes a subject of mirth how frequently Len dies in songs, but I hold that this is a manifestation of this truth. In one of the greatest vocaloid song stories ever (which I do not embed here because one should watch and listen to it with attention undivided, but I link it in the endnotes. I won't tell which it is so that the following won't spoil it) Len sacrifices his life to save Rin, which leads her to repentance. Also, this comes about because of circumstances related to Miku, with whom, in this story, Len is in love. In many stories Len sacrifices himself, in still more he faces death. In another story, Rin sacrifices herself to save him, and this enables him to redeem a broken world. Thus the Kagamines show human relation as a figure of human-divine relation, and especially as above when Miku too is beloved, connect the two. As I believe Bl. John Paul II said, the horizontal and vertical together make the Cross. 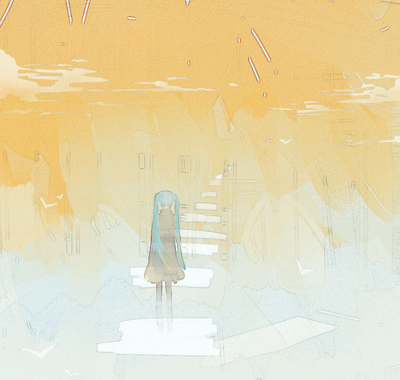 Here are some good songs and videos which further exemplify what I am saying:

Miku:
No you, No me
Hope
Rolling Girl
Clock Lock Works

* I think a deal of interesting poetic theology could be written on the human soul as a sort of femme fatale--God became incarnate, which meant His terrible death, for love of her.

Videos and pictures copyright their respective creators. Pictures are from Piapro, the vocaloid art site.
Posted by Mary MacArthur at 7:20 PM

Labels: art not by me, essay, vocaloid