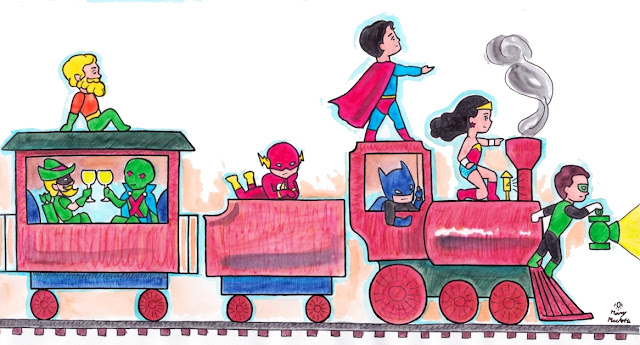 The return of Superman, one of those surprises that everybody knows is coming, is both one of the best and worst parts of the film. Bruce's arguments for it are fascinating and revelatory from a character development standpoint. Then after Superman is alive again, you know convention demands the team will have to fight him, and that segment is extremely impressive, with a perfectly-done moment of great alarm and excitement when the Flash's speed, an effect well-shown throughout, is ineffectual against the Kryptonian. Batman's stolid selflessness also shows here. But the next sequence of Clark's revival is terribly inadequate.

Lois is catalyst for Clark's recovery from whatever problem was making him violent, but it is not at all conveyed what that was, how it was affecting him, what he went through and how she makes him better. All we get is standing around in corn, kissing, and some more snarky jokes. After the clarity of emotion in scenes of the Kent farm in Man of Steel and Batman v Superman, now there's nothing. Just utterly conventional hugs, smiles, and lame gags. Good music would have certainly helped, but still. Quit the snarking for one minute, please, and let us know what was wrong with him and how the woman he loves made him better! That could have resonated so well with the themes established in Wonder Woman too!

If I could change one thing about the movie it would be changing it to Hans Zimmer's music. If I could change two things, it would be that and these scenes of Clark's recovery. It was just a undefined okayness. It should have been a resurrection.
Posted by Mary MacArthur at 3:12 PM

I haven't seen the film yet, but I suspect that you are largely right. Joss Whedon does his his best work , I think, when he is in some way (beyond the contractual) personally committed. That's why Firefly is probably his best. And when his commitment is primarily story-telling and character development, he seems to forget the Social Justice claptrap. I suspect he is also actually more of a Marvel person in his own character than a DC person. The snarkiness arises naturally from the wisecracking that was built into some Marvel characters from the start (particularly Spiderman). No one in silver age DC made wisecracks to the degree that some Marvel characters did. I can't see any good reason to bring Whedon and Elfman into this franchise.