A glimpse of a world of bears and wolves 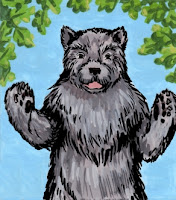 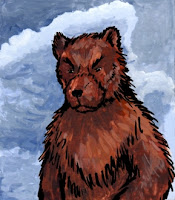 Writer Jack Mikkelson a.k.a. Laramie Hirsch has posted some fascinating background on these bears and the world in which they dwell:


Taking a break from the world’s insanity, let’s escape to that favorite world of mine—the one where an ancient wolf was given power by the very angels, shortly before their eternal imprisonment and Man’s expulsion from the Garden. Let’s return to a world that serves as a prison for this being, who endowed with powers beyond our reach, is both demigod and emperor of his corner of the universe. We return to this place, locked away and kept from men, but ruled by animals and all manner of beasts who, unnaturally ensouled and endowed with speech, go about their lives oblivious to whatever cataclysms may shape our Earth.

Honestly, it truly reminds me of Tolkien, but a more earthy, frontier milieu. The first novel of this world, Bovodar and the Bears, is available in both paperback and for Kindle, and the graphic novel adaptation is underway!
Posted by Mary MacArthur at 11:31 AM

Labels: books, Bovodar and the Bears, comics, link to elsewhere