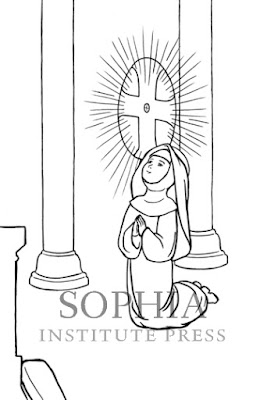 Volume 1, which has January-June, is available here.

Blessed Imelda Lambertini was a figure I particularly wanted included in the book, which is why therein she's given the alternate date of December 20; her usual day is May 12, but that's an observed day, of St. Pancras. She was a young religious oblate who dearly wanted to receive the Blessed Sacrament but wasn't going to be allowed to until she was 13 years old. When she was 11, the Sacred Host levitated over to her, so the superiors relented in the face of the miracle and she was given Communion. She died of ecstasy.

It's beautiful, and it goes to show how thoroughly, damnably stupid it is to forbid Mass and Communion because of  the possibility of contraction of a virus that might cause some people to die. If we truly understood in our hearts what is happening whenever we receive Communion, WE WOULD DIE. Like Blessed Imelda. So I suppose according to the people who think possible death must be avoided at all costs, we should ALWAYS forbid Communion!

Obviously, I am not saying that we should not take reasonable care to preserve human lives, but I am saying that death is by far not the worst thing in reality, and that many things are far more important than avoiding the possibility of death. The Blessed Sacrament primary among them.
Posted by Mary MacArthur at 2:16 PM