A while ago I talked about getting Rin and Len Kagamine ball-jointed dolls. Well, you can't have horizontal relationality without vertical relationality, so later, we also got Miku! 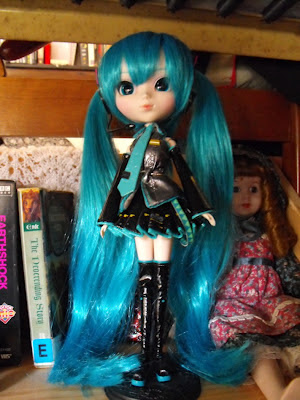 She's a Pullip. Now, these dolls aren't just for standing-still display. My sister and I have made outfits and done a photoshoot based on the Kagamine's song story Prisoner and Paper Plane, and it's but the first of many, hopefully! I'll post shots therefrom shortly.
Posted by Mary MacArthur at 2:36 PM