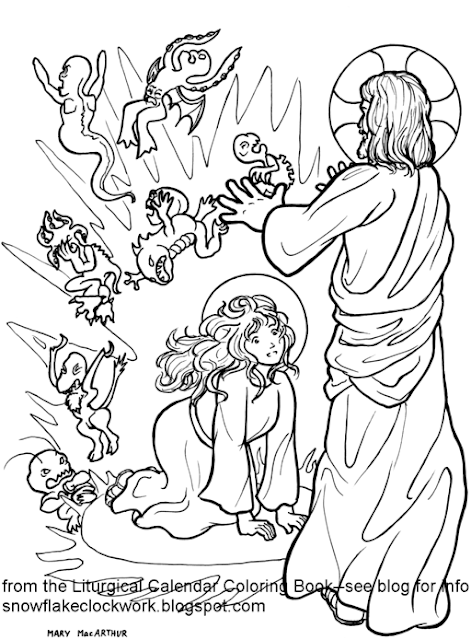 It was hard to decide what scene to do, because there's such controversy about when all she appears--was she the sinful woman with the ointment? Was she Martha's sister? (to say nothing of other suggestions which deserve nothing said about them)--so I went with an incident where she is definitely named, Christ casting seven demons out of her. And that's not one I've ever seen portrayed before, so, that's cool.

But I'll say one thing: Yes, it's true there's no Biblical basis for saying she was a prostitute. But the people who insist that she MUSTN'T have been, that that is nothing but FOUL SLANDER by the HORRIBLE PATRIARCHY, those are the people who are denigrating her, prostitutes, and women. Because they are implying that anyone who was a prostitute could never be a great disciple, denying prostitutes the dignity of eventual sainthood and a place in the Kingdom. Very like the Pharisees. So, I'm not saying she necessarily was, but if she was, her repentance is of great valor, and it takes nothing away, but rather adds, to the glory of her sainthood and the honour due her.

Going for a bit of Bosch-like-ness with the demons.

Sign up here for coloring pages of every single Saint's day!
Posted by Mary MacArthur at 1:13 AM