Bovodar and the Bears preview: The Wolf King 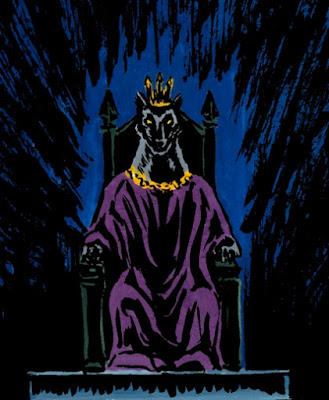 A panel detail from the upcoming Bovodar and the Bears graphic novel, written by Jack Mikkelson.

One of the reasons I'm so enthusiastic about this story is the enigmatic, fearsome figure of the Wolf King.

He does not merely rule over a nation or a realm.  In truth, the Wolf King is the emperor of the entire world.  He is no rude beast.  He is not simply a wolf.  He walks like a man, gestures like a man, and is just as smart as a man--even smarter, in fact.  More than that, the Wolf King has powers that cause many to think of him as a deity.
Though the primary form of the Wolf King has been that of a wolf, he has been known throughout the ages to take many other forms.  He is master over the East and the West, the Landed North and the Southern Sea.  He bestows gifts to whom he wishes, and he punishes those he sees fit.  He can lift mountains.  He can move rivers.  He can obliterate cities.  And finally, he can remake beasts to his liking.

Read more about him on the author's blog, or get the exciting novel!
Posted by Mary MacArthur at 6:00 AM