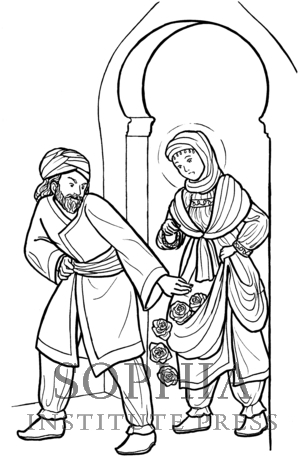 St. Casilda was born a Muslim princess in Moor-occupied Spain. She would bring food and medicine to the Catholic prisoners and listen to their witness to Christ. Once when a guard tried to catch her at it, the items became roses. Later, she fled to a Catholic region, was baptized and became a religious. Because she was not yet baptized at the time portrayed in the illustration, I made her halo incomplete but still present because she already believed and was living virtuously. Her commemoration is April 9.
Posted by Mary MacArthur at 11:27 AM