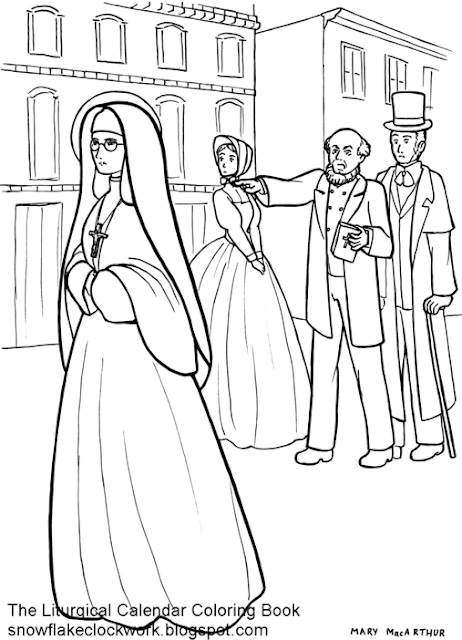 I got the October coloring pages out on Thursday after a lot of work. So I took Friday off and spent all day playing video games. ^_^ The October saints are:

Blessed Marie-Rose Durocher was a Canadian foundress and teacher. The yelling guy is Charles Chiniquy, n priest who apostatized and became a Protestant minister and wild conspiracy theorist. While he was still an active priest he tried to take control of Sister Durocher's schools, and after he left the Church he tried to make it his mission to rid Montreal of Catholic influence. He claimed that President Lincoln's assassination was arranged by the Jesuits, and his publications became a source for Jack Chick, the infamous anti-Catholic comic-writer. Yeah, not pretty.

Go here to sign up for coloring pages for every single saint's day!
Posted by Mary MacArthur at 8:15 PM