Holy Family coloring page, December pages, and with that it's done!!! 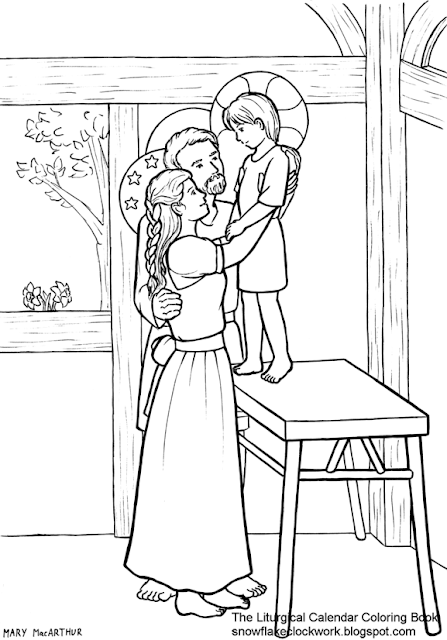 Back on Monday I sent out the December coloring pages. Included were:

The reason it took so long between sending it out and posting about it is I've spent the intervening time sending any subscribers who wanted the whole thing now all the months they lacked. And now, the whole thing at once is available to all! Just check out the new Liturgical Calendar Coloring Book page! There are tons of options! The whole thing through email or even on a CD! Or single months, of your choice! And as before, good old year subscriptions.

I now feel a tremendous sense of relief, and gratitude. This was the biggest work I've done so far, and I think it's worthy of note. Every single saint's day!!! It's a total of 247 pages! Two-hundred and forty-seven drawings!


I mentioned before, this thing kind of became my prayer life. Each picture was a conversation with saint, and I frequently said, "Well, you'll forgive me for that." I really wanted to avoid a lot of compositions consisting of the saint standing there, looking at the camera, so I researched them, looking for strange and dramatic stories.


One thing I found was a proliferation of martyrs. In my experience Christians, and not just kids, know about the Roman martyrs, but not much about subsequent persecutions. The truth is there is a hardly any time in the history of the Catholic Church when people weren't being killed for the Faith somewhere in the world. There are martyr saints who were killed by Pagans, Arians, Iconoclasts, Muslims, Eastern Orthodox, Protestants, Enlightenment revolutionaries, Hindus, Buddhists, Shintoists, Fascists, Communists, and even other Catholics acting out of earthly pride. I was honored to draw pages of Japanese, English, Mexican, Chinese, Roman, Ugandan, Vietnamese, Korean, and Filipino martyrs. The Body of Christ conquers through the Cross.


This project made me progress immensely, in composition and anatomy (hands and feet in particular,) and in the ability to draw several pictures in a limited amount of time. Yes, it was extremely stressful at times, but it was definitely worth it. I thank the subscribers through this first year, who had patience as I figured out how to best distribute. Now everything's settled so I can send it out to more and more people. And of course, I thank God and all the saints.

Congratulations! I've loved seeing this project unfold through this blog. Every one of your pictures did a great job of telling the stories of these great Saints.

Thank you very much!

Thank you so much for these beautiful coloring pages, I wish I could make something so beautiful! I have had such fun sending people on to your website. they are always amazed at the beauty and quality of expression in the coloring pages. Thanks for sharing your gift!

Thank you for your talented work. I always print out coloring pages of the martyrs and stick them on my windows and door for trick-or-treaters to see on All Hallows' Eve.