Scene from The Naval Treaty 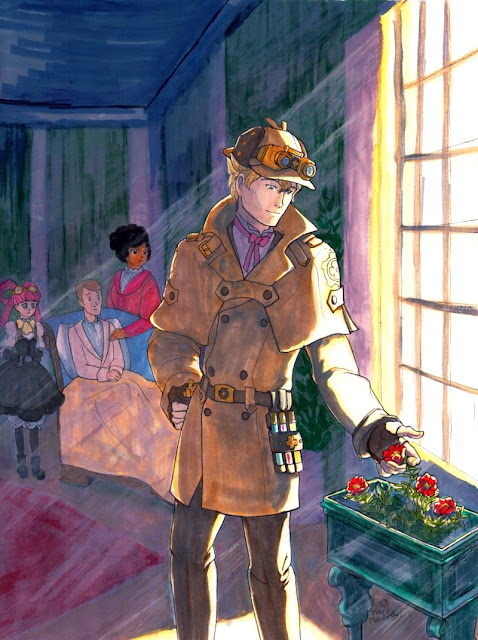 He walked past the couch to the open window and held up the drooping stalk of a moss-rose, looking down at the dainty blend of crimson and green. It was a new phase of his character to me, for I had never before seen him show any keen interest in natural objects.

"There is nothing in which deduction is so necessary as religion," said he, leaning with his back against the shutters. "It can be built up as an exact science by the reasoner. Our highest assurance of the goodness of Providence seems to me to rest in the flowers. All other things, our powers, our desires, our food, are all really necessary for our existence in the first instance. But this rose is an extra. Its smell and its color are an embellishment of life, not a condition of it. It is only goodness which gives extras, and so I say again that we have much to hope from the flowers.”

I absolutely love that speech. The fact that it's in the story right before "The Final Problem" adds to the poignancy. This is a picture I've wanted to do for almost a decade, but couldn't until recently, because, well, my original desire to do it was different. I wanted to illustrate the scene since I first read it, but I didn't want to use the typical, Sidney-Paget's-illustrations-combined-with-Basil-Rathbone's-performance character design. At that time, I would have used the Benedict-Cumberbatch's-performance design, and I wanted to embark on a whole fanart series of illustrations of the stories using the likenesses from the BBC show. But then, that series had him deny the existence of God.

Which is just, um, what? Not only is there the above speech, Sherlock Holmes more than once quotes the Bible and considers as a compliment the implication he would have it always at his side; he met his college friend Victor Trevor "on the way to chapel"; his response to people thinking events are supernatural is not to discount the possibility but to say then they're beyond his power; he "breathed a prayer of gratitude" when Sir Henry Baskerville wasn't killed by the hound; and he credits the fact that he did not become a criminal, not to mention his survival at Reichenbach, to the grace of God.

So that rather threw a damper on my plan. I didn't do those pictures then. But now, there is the Great Ace Attorney version. And oh, I'm so happy Shu Takumi did so much better in that regard, as well as others, than the BBC. So now I can finally illustrate scenes from the stories with adaptation-specific character designs, like I wanted to so long ago. So expect many many more such pictures!

I'm very very happy with how this turned out, and there were several times I was a bit anxious. As I often do, I sketched it on paper not meant for wet media but then found that's just what it required. It's gouache with marker on top and then watersoluble colored pencil for the rays of light. I've recently thought my work doesn't have enough value contrast in large areas, so this technique of gouache for shadows is one I intend to use much more. Then, for the final touch-up of the outlines, I was using a dark grey Marvy Uchida Le Pen, and I was almost done when it ran dry! And there were none to be found in any local shop, so I had to order online and wait weeks for them to arrive! Which was tricky because this is my introductory piece to this series and I have another lined up for Christmas! Fortunately they arrived in time.

Being events from the books, naturally they won't spoil the games, but they will have some characters in their roles which don't get explained until later in the games, so if you don't want to be spoiled, maybe don't pay too close attention. I will mark off parts in the descriptions where I refer to game spoilers, like shortly below.
As I'm approaching this, I'm not worrying much about chronology nor publication order. Pedantry on this matter (including my own) will be disregarded.

SPOILERS BELOW!
And as for Watson: as I reread the books this time through, imagining the GAA versions, I just let each individual story unfold naturally whether Iris or Mikotoba appeared in that role in my mind. As we saw in the games, in her writing Iris was drawing freely from both Mikotoba's case notes and things that were happening at the present time. And you will see, I interpret some of the stories as occurring after the games... and affected accordingly.

Returning to this specific, beautiful scene, I even have to wonder... Giving Sherlock's gear a flower motif as Iris's mark of craftsmanship, and the mention of the single flower that was there when Asougi awakened from his coma, which only Sherlock could have left... I can't help thinking they might have meant to hearken to this speech and its significance, of faith in Divine Goodness in the face of death. An apt theme indeed.

Posted by Mary MacArthur at 9:46 PM